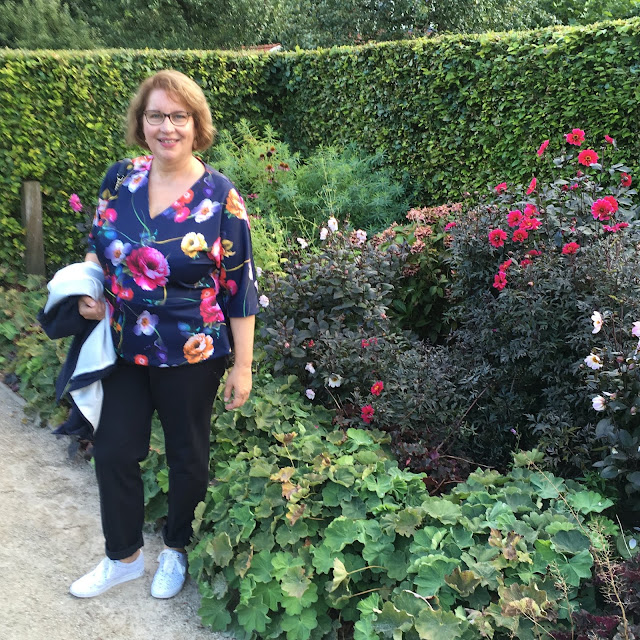 As some of you will know I'm a gardener who often disappears from the blogosphere during the summer months. Summer is for the foxgloves, winter for the thimbles. Except, this year we had what felt like a never ending summer, followed by an Indian summer, and then some more fine days. Less sewing, but lots of outdoor fun!
On one of these glorious days in early autumn we were invited to a garden party in the woods.

I always struggle when part of the dress code says casual. Casual, casual chic, business casual....Definitely not a party dress and heels, but also not my lawn mowing-type casual outfit. Invite me for a formal event and I immediately start planning and sewing an outfit, but I've been terrible at this casual stuff all my life.
For this occasion inspiration finally came from a piece of floral fabric. 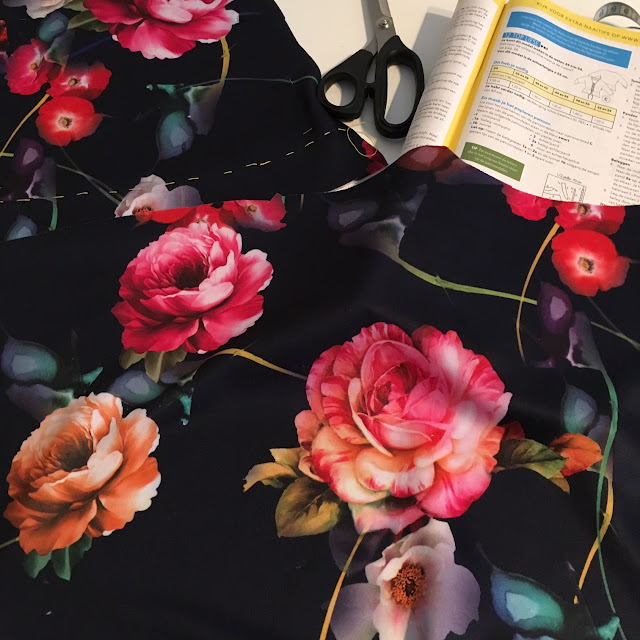 A scuba knit with a pretty digital rose print on a dark navy background. It was my first time working with scuba and I did not know what to expect. Because I did not want to break up the pattern in too many places I started looking for a top with cut on sleeves.

This dolman sleeve top from Knipmode March 2018 (available as pdf) more or less fit the bill. This type of top can look massive on me, but I liked the fact that the waist seam would probably provide a hint of waist definition. I cut center front on the fold and skipped the drawstring. The line drawing suggested extra length in the front, but the pictures of the finished garment showed that the front became shorter than the back when the drawstring was used. There was hardly any extra length in the front bodice so I figured I could use that scant centimeter to serve as a tiny built-in FBA. 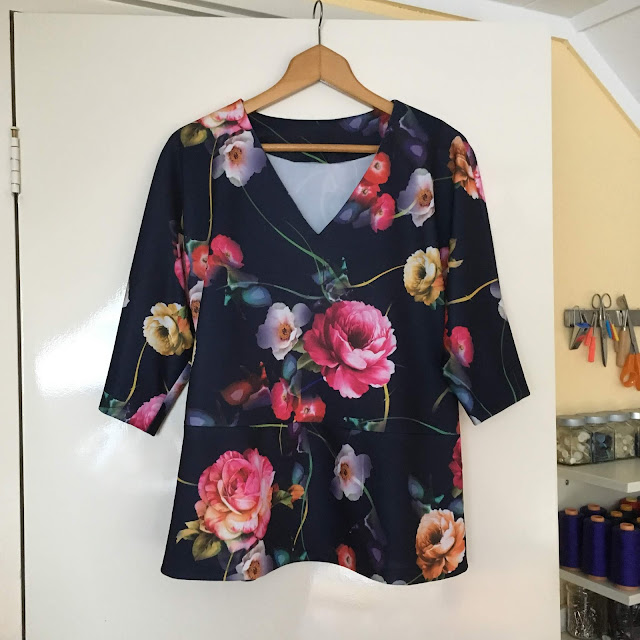 I mentioned it was my first time working with scuba and I can safely say it'll be the last time as well. Pressing was a nightmare! Scuba is spongy and it was not easy to get a nice and sharp V, not even with the firm use of a clapper. But the biggest disappointment was that this fabric is rather prone to snagging. Luckily I was not yet aware of that fact during the first outing of this top.

The location of the party was so beautiful. We arrived at this dreamy forest (glad I wasn't wearing heels!) 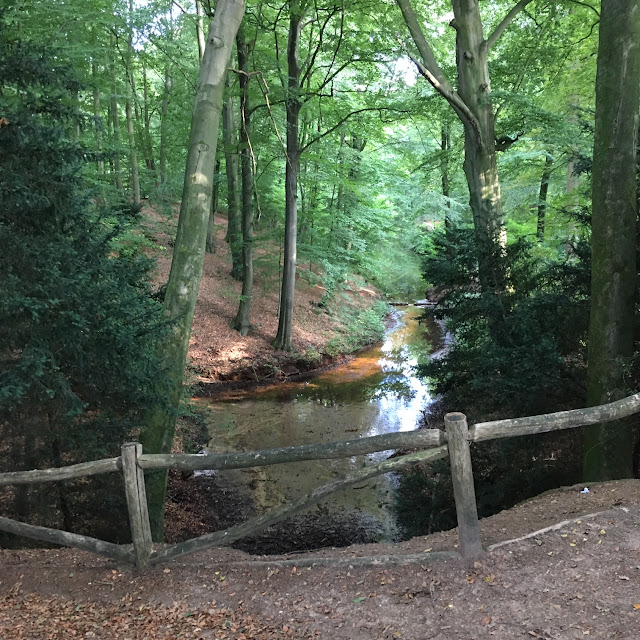 After a short walk we reached an open spot with the entrance to one of the most fabulous gardens I've ever seen. A beautiful cutting garden, a maze formed by Verbena plants, a small open air theatre, stunning ponds, sculptures and a large glasshouse. The garden once was part of an estate that was destroyed during the 1944 Battle of Arnhem. Only the foundations of the large country house remained, and part of the garden walls. Fifteen years ago a group of volunteers started restoring the garden. They did an amazing job and created a peaceful oasis on what once was a battlefield in a region where many lost their lives during airborne landings and fights for strategic bridges. 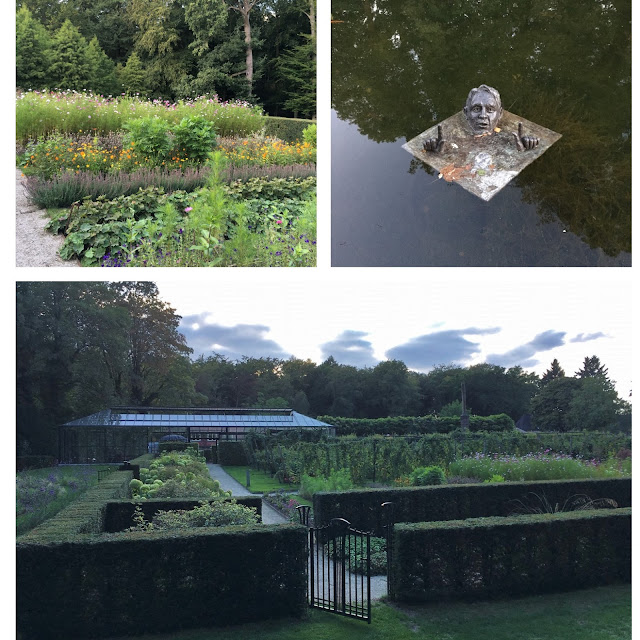 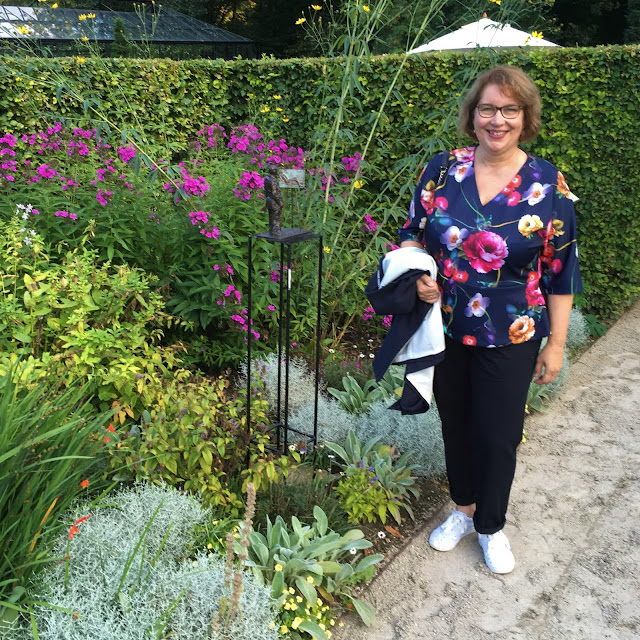 One more picture of my new top with a gorgeous backdrop of magenta Phloxes.
I always find it funny to see myself from the perspective of Mr Foxgloves, like I instantly shrink 8 inches!

It's been a long and wonderful summer, even though sewing was on the back burner.
Now, with the garden set safely stored in the shed and the chimney sweep's job done I think it's time to officially declare the garden season over and snuggle up in my sewing room.
Or? Even on the 10th of December there are still a few roses and marigolds in bloom, and I picked raspberries for lunch!