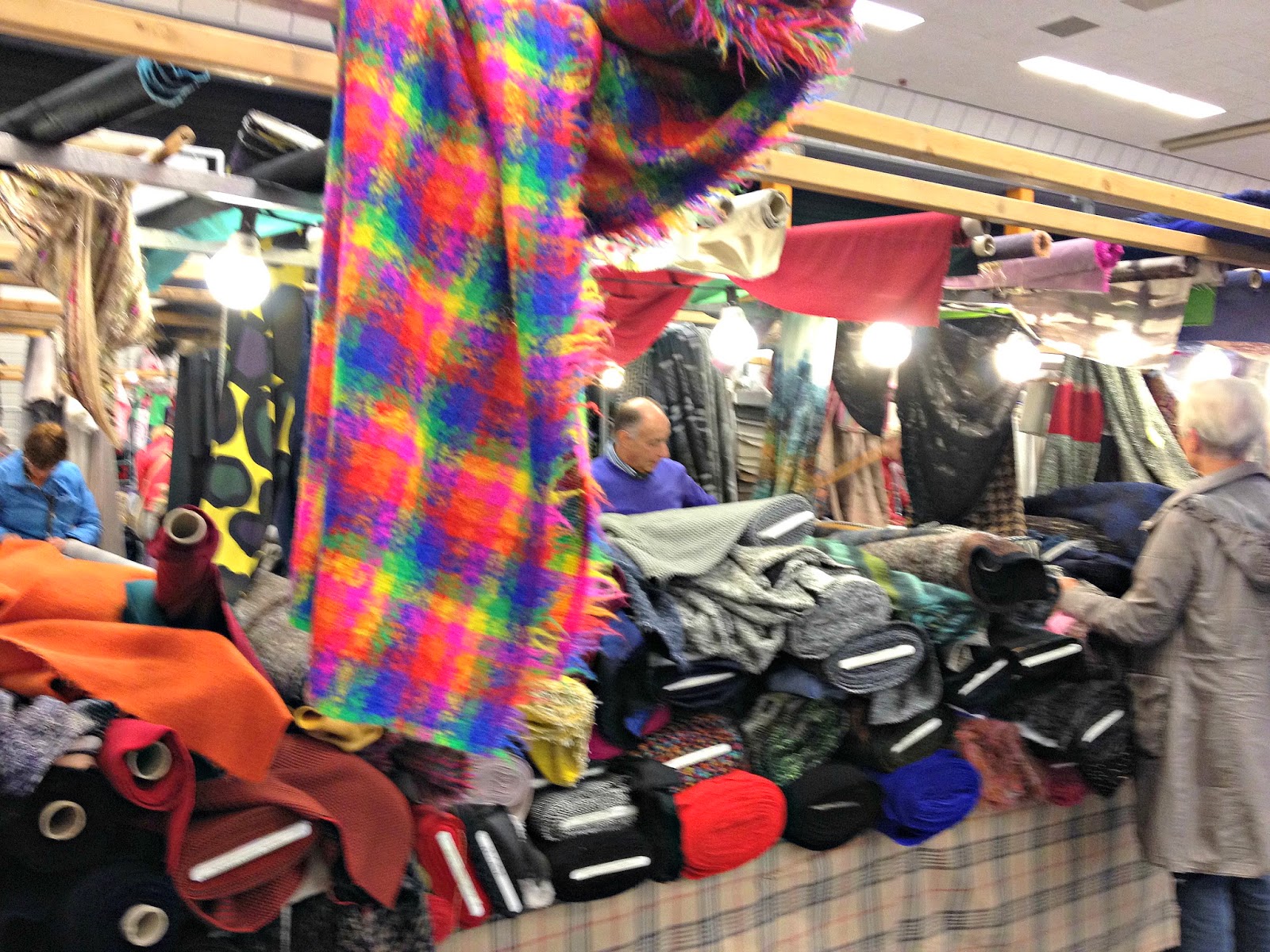 Twice a year the Stoffenspektakel stops by close to where I live. It's a wonderful opportunity to buy fabrics from 80-100 different sellers from all over the country. During my visit at the spring event I posted some pics on Instagram. When I got home I noticed how another Dutch blogger, Beata of Red Point Tailor, had been tweeting from the same spot. If only we'd been using the same platform we could have met for coffee and a chat!

This time around we planned to actually meet at Stoffenspektakel Barneveld. I arrived early and waited near the main entrance. And waited. And waited some more. We skipped the most sensible part of planning a meetup: exchanging phone numbers. Darn! Just as I started thinking something unexpected had come up, Beata posted a picture on Instagram. She arrived from another entrance! Okay. Spot-Redpointtailor-time! Where to start in an enormous hall with hundreds of fabric shoppers? I just started walking the lanes, looking at fabrics and keeping an eye out for a familiar face. When we finally bumped into each other it was a true facepalm moment. Come on, sewing Sherlock! You could have known! The best fabric seller around, Kruyff Couture Fabrics, has a magic spell on both of us. We can smell their fine fabrics from a distance!

Beata and I immediately started discussing all fabrics. 'That beautiful wool crepe is awesome for your Marfy 0303 dress' and 'What do you think of this bouclé for your next French jacket?' When we told the sales lady we had never met before she said: 'Really? Who would have guessed? You know really well what the other is looking for!' When we started repeating sentences like 'You should soooo buy that. Of course it's expensive but it's beau-ti-ful!!!' we decided to take a time out for coffee and apple pie. Good call!

It was so much fun to talk about sewing habits and not getting a blank stare in return but 'O, I totally do that too!' Thanks Beata, for a wonderful afternoon. It was fun meeting you! 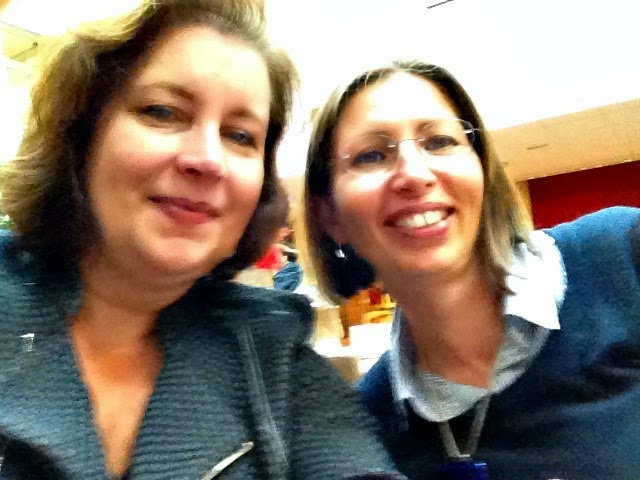 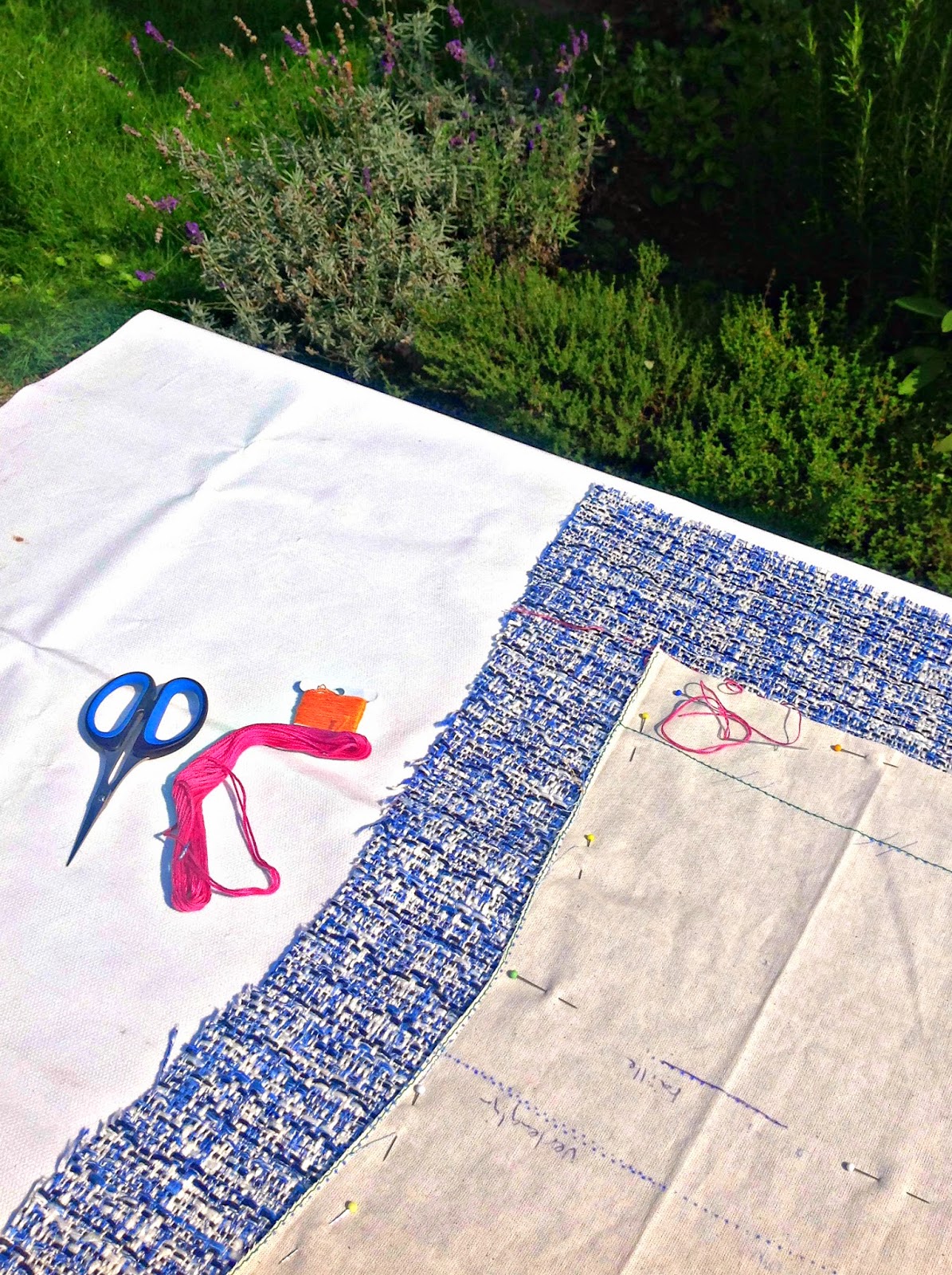 After sewing some Vogue and Indie patterns with included seam allowances it was such a relief to work with marked seamlines once again! To quote Claire Shaeffer: 'The cutting and marking process is very different from that of home sewing. The couture method of construction is to match the seamlines, not the cut edges; therefore, seam allowances can be any width and are often trimmed after the garment sections are stitched together." (source: The Couture Cardigan Jacket). What??! In my neighbourhood that's the definition of regular home sewing! Who would have thought that even the first Barbie coats and aprons I produced during my childhood sewing experiments, as ugly as they looked, were made using couture methods!

Over the years about 80% of my sewing projects started with thread tracing. And when I don't, I feel guilty for cutting corners. Goody two-shoes? Who knows, but it's really working for me. The markings are accurate, visible on both sides of the fabric, and unlike chalk markings, they do not disappear unless I want them to. Specially when it comes to putting in sleeves I really like the guidance of properly marked seamlines. Also, back in the glorious days of fewer fitting issues, using ample seam allowances near critical spots enabled fitting on the go, as opposed to making toiles. But I digress.

Speaking of ample seam allowances! I used 7 cm at the seamlines and about 10-12 cm at the hems. And I needed it, because that bouclé is fraying like mad. 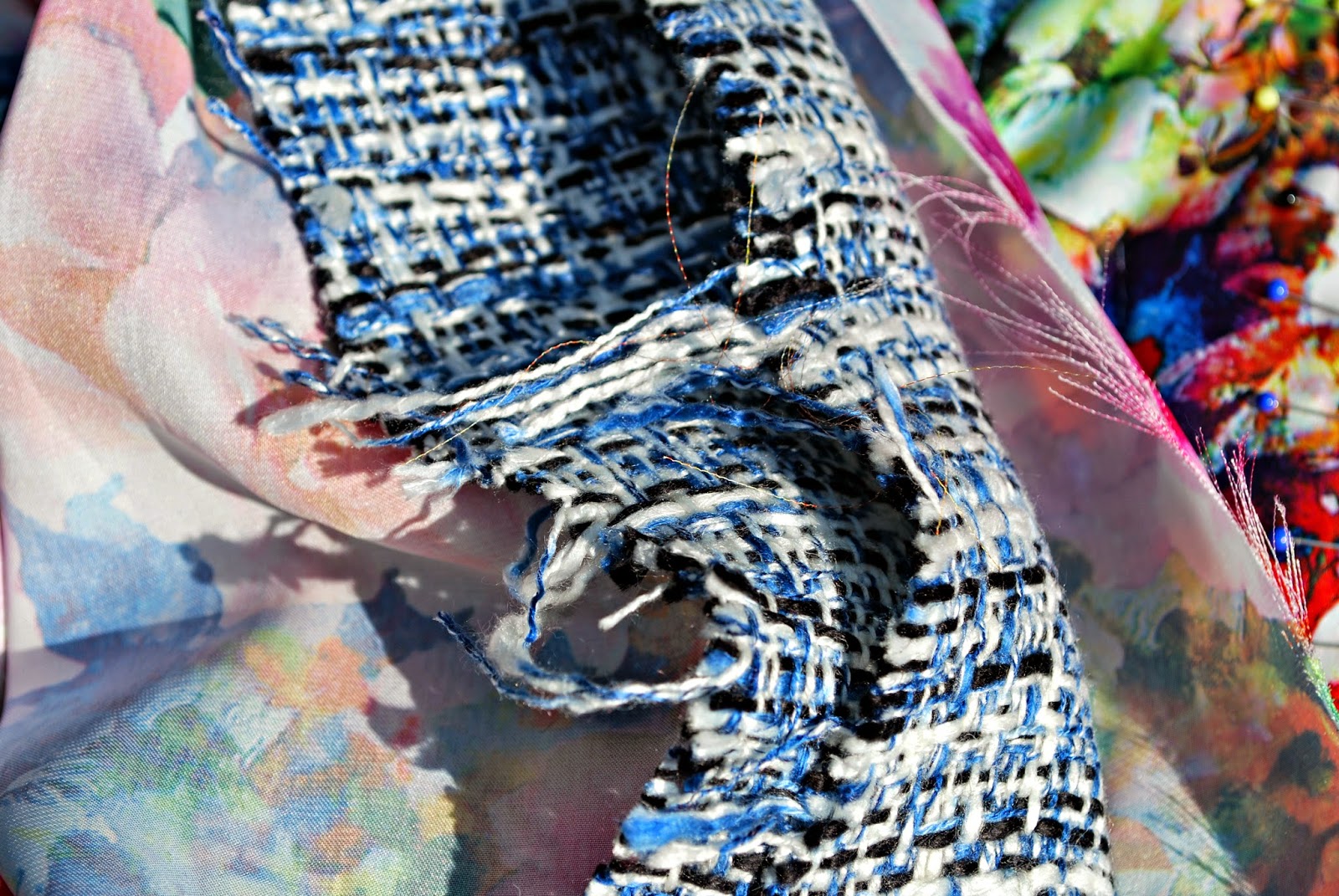 After marking all seams and grainlines the next step was quilting lining and fabric together. Oi! How? Where? After comparing all instructions I could find in books and on the internet I started with a test run to determine the right stitch length and tension. I also had to pick a colour for the thread. Since the lining had all colours of the rainbow in an ever changing pattern there was no way I could find a colour that would match each and every flower on it. It was just as arbitrary to choose pink as it was to choose blue on the bobbin. Blue felt safer, in case the bobbin thread incidentally showed on the right side. The fashion fabric consists of threads going from white to dark navy and at least five shades of blue in between. Laying out several spools of blue thread on the bouclé showed how the middle tone almost disappeared, as could be expected.
After fiddling around I settled for stitch length 4.5 and tension 7. (The test row on the right) 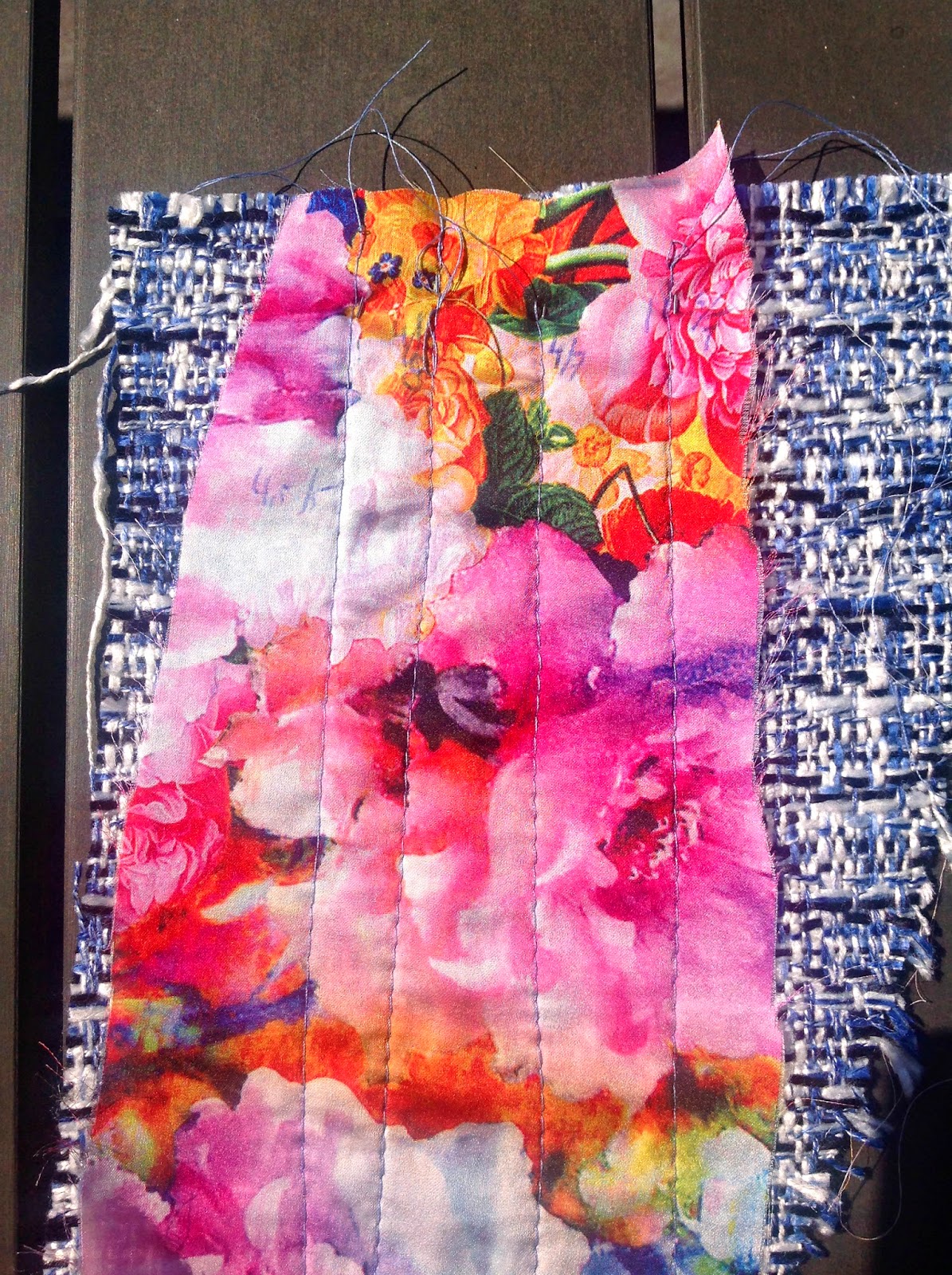 Since the order of construction of a cardigan jacket is very different from a tailored jacket the quilting rows have to be placed very carefully. The quilting rows are all parallel to the grainline but they stop 3-5 cm from all seams and hemlines. You need that space later to turn under seam allowances and hems. I used a quilt ruler to determine where the first and last quilting row would be and then decided on the spacing of the rows in between. 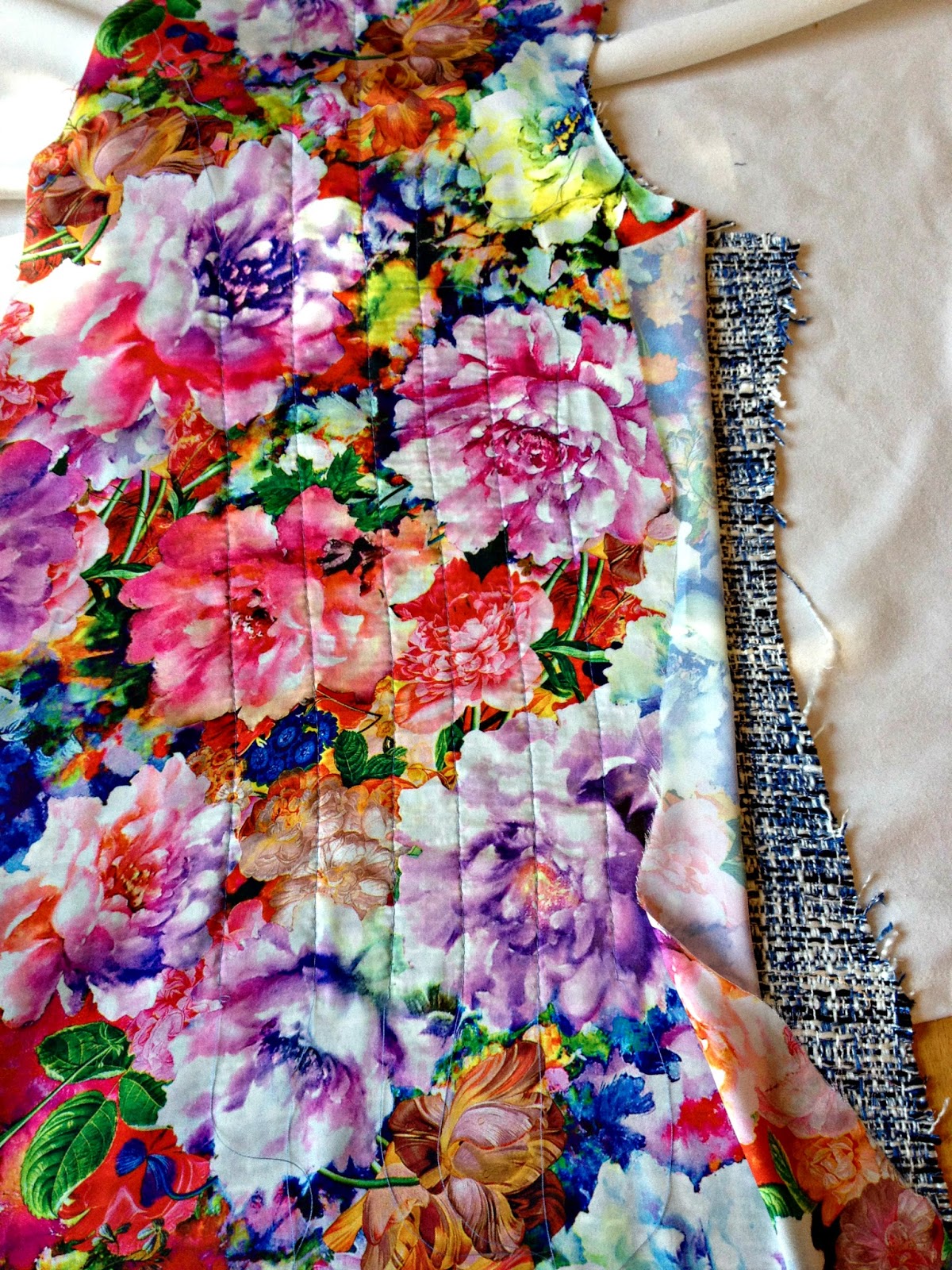 This is the first panel. I'm happy to report the execution standard improved after a little more practice on the next panels. Also, this was before pressing and with long thread tails still showing at the beginning and end of each row. 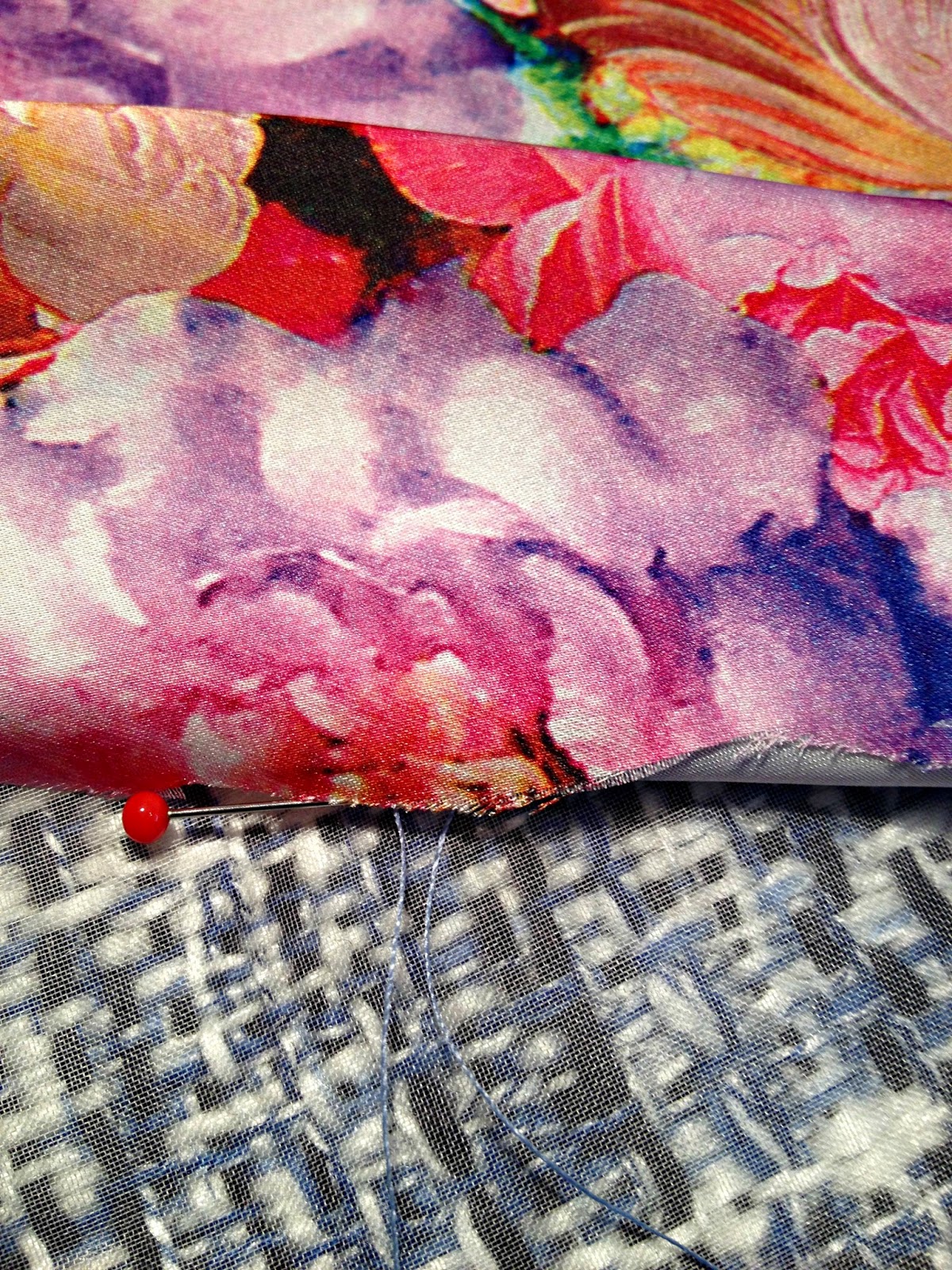 Ahh, those tails! A gazillion of them, all waiting to be pulled between layers where they end up in a double or triple knot. Here's another reason why you should not work on a French jacket with any time schedule whatsoever on your mind. Because, seriously, how long can it take to tie those knots? Forever, when you're in a hurry. Not nearly long enough when you're mindfully working your way through these tiny knots on a sunny autumn day. 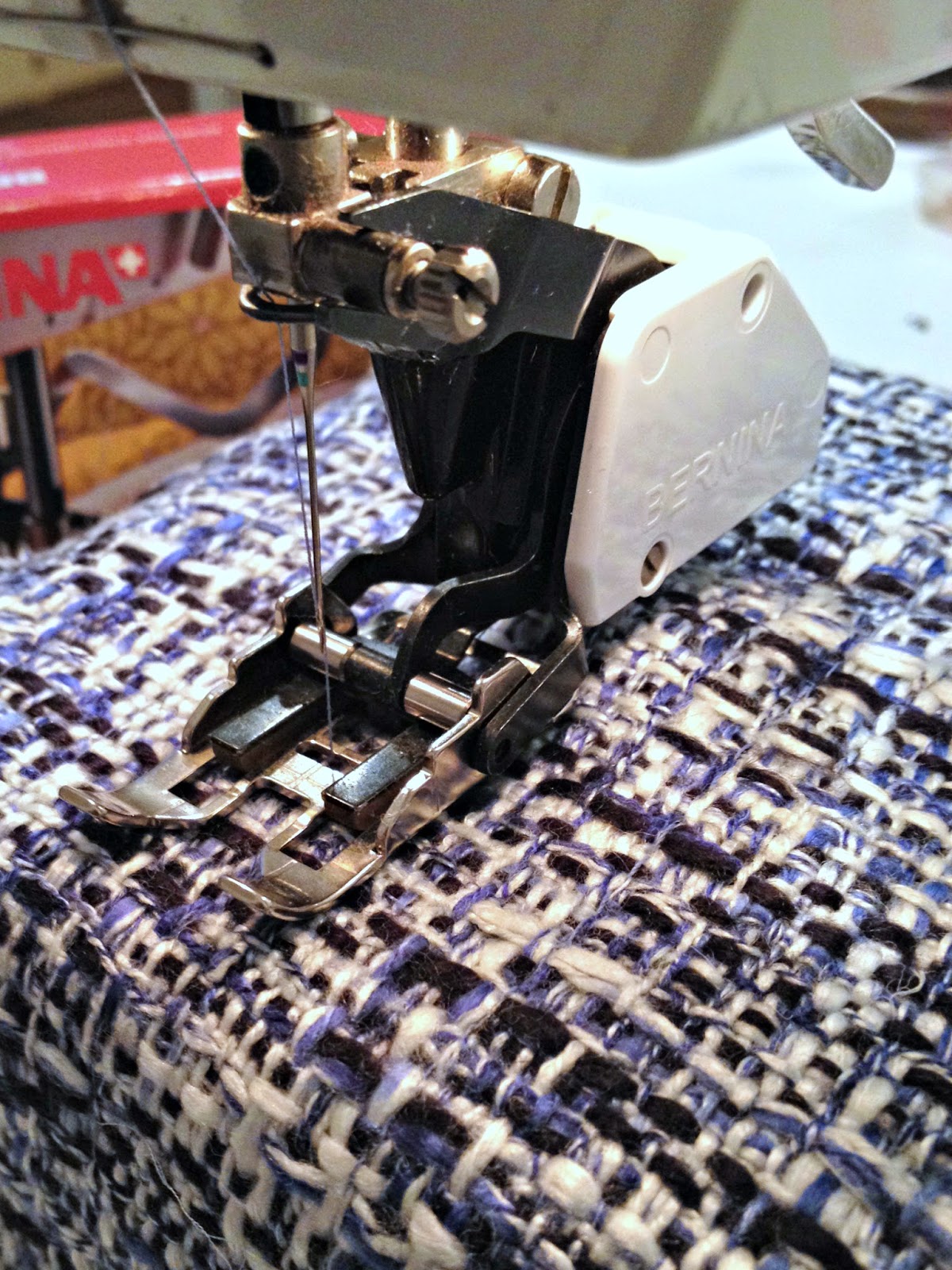 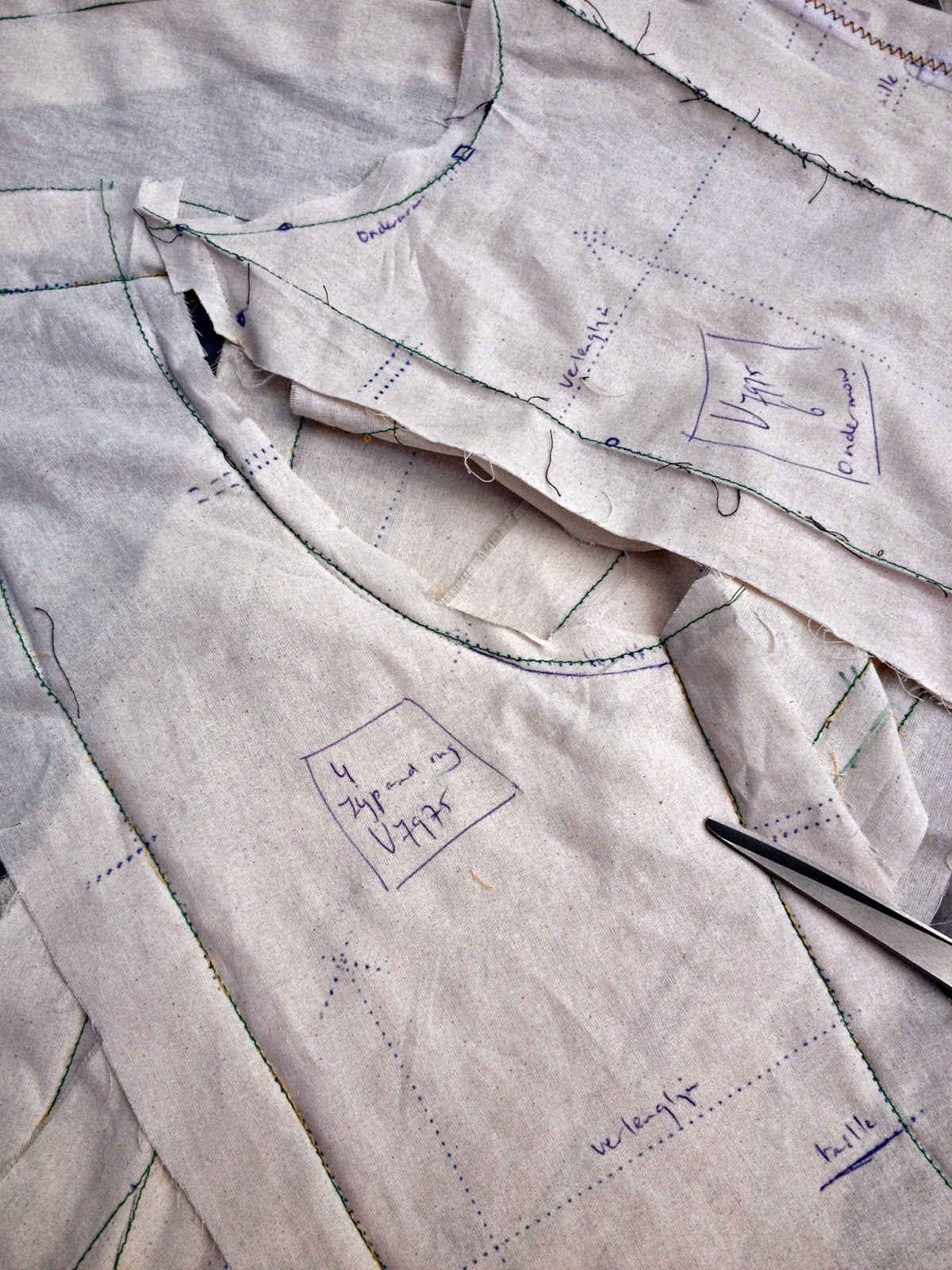 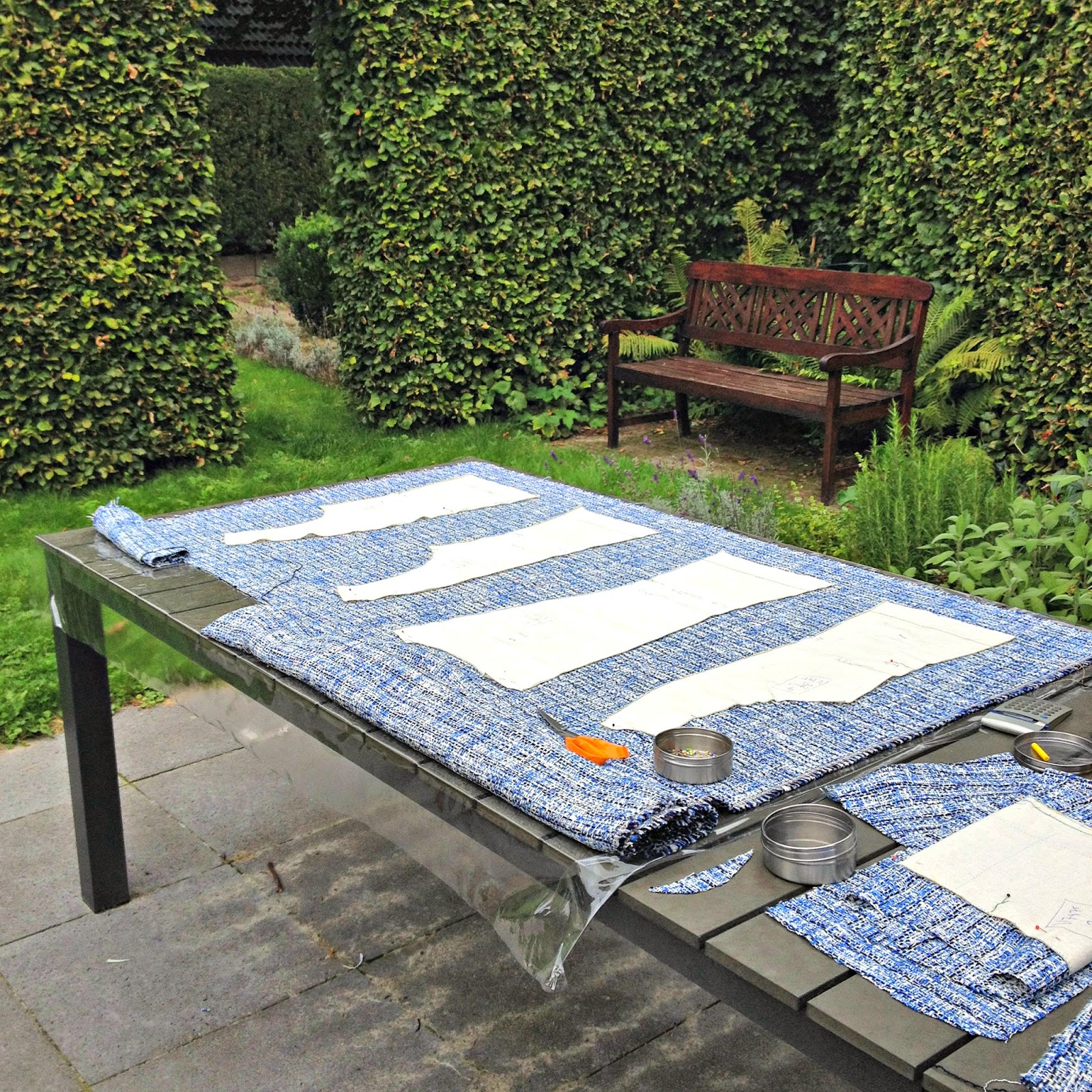 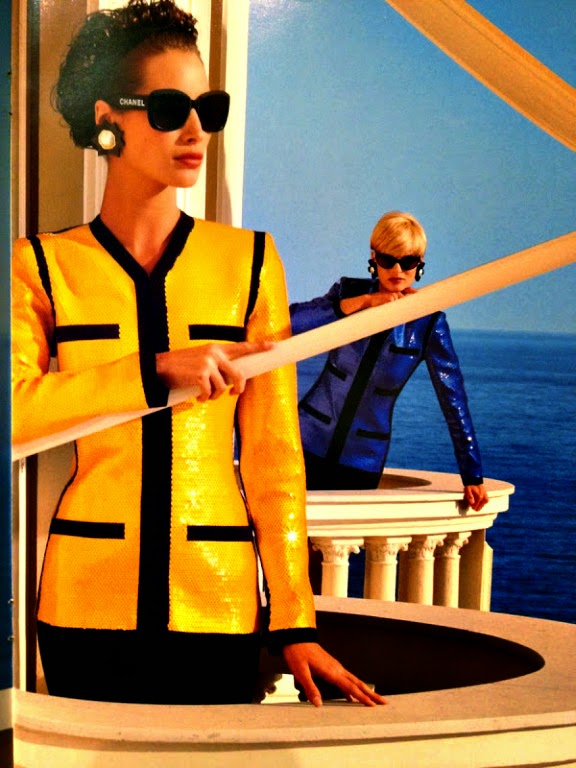 Aren't those French jackets Chanel-inspired and thus boxy and square, with high rounded necklines and made from pastel coloured tweed? Boxy jackets don't look good on my curvy frame, high necklines are to be avoided at all costs and I don't do pastels. It's no surprise that when I visited the Chanel exhibition in The Hague the overall look of a lot of the garments on display did not really appeal to me. Of course I admired the details, the beautiful fabrics and the stunning techniques. I just could not picture myself wearing the 1960s iconic jackets. 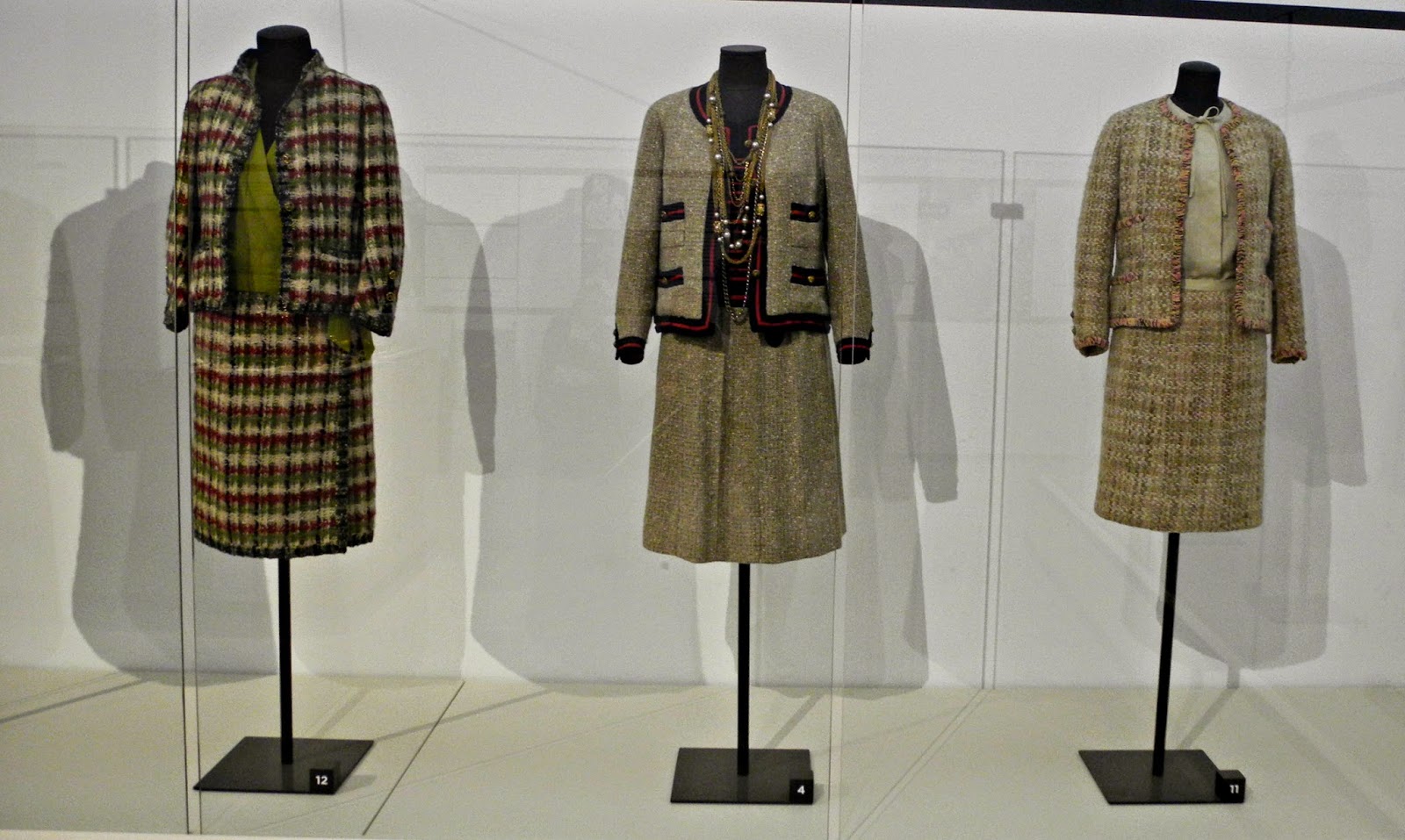 We followed the exhibition's timeline and when we reached the Karl Lagerfeld for Chanel collections the look and feel of the jackets definitely changed. Especially the yellow 'Scuba' jacket from the 1991 spring/summer collection caught my attention. Not because of the colour, or the sequins. This jacket had a v-neck, a zipper, it was a bit longer, had a sleeker outline and waist definition! 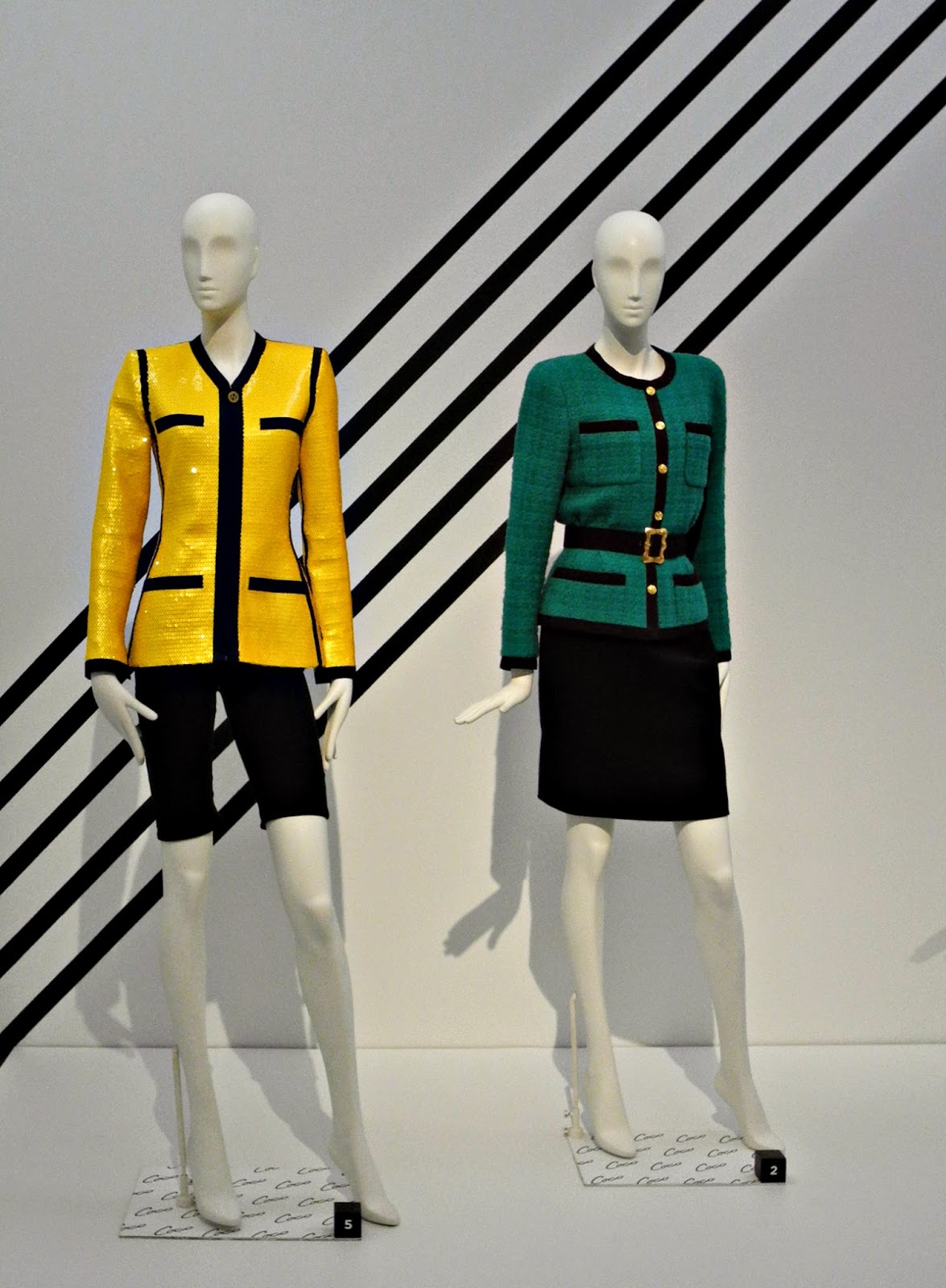 Or how about this cropped jacket? 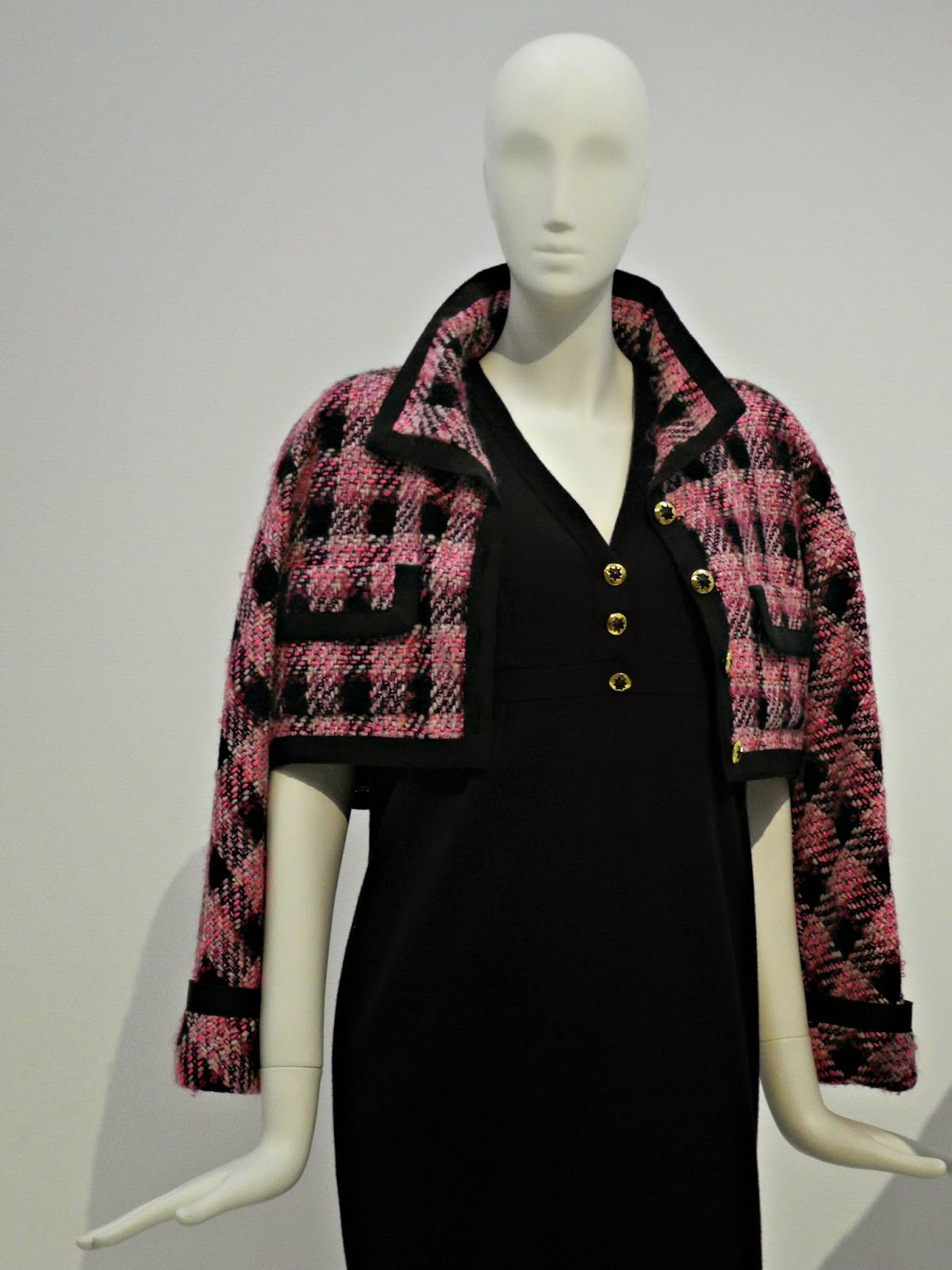 Finally the penny dropped. It was never my intention to knock off an existing jacket. All I wanted was to learn some new techniques and create a soft tailored, comfortable jacket in beautiful fabrics. The only way to go was by choosing a pattern with the right style lines for me.  A pattern however that would have to meet the needs for making a quilted jacket.

Bouclé or tweed are the most suitable fabrics for making a couture cardigan jacket. The lining is quilted to the fashion fabric and you need texture and loft to hide the quilting lines on the outside. Working with a textured fabric means you don't want to work with darts because they may end up bulky. Princess seams, and especially princess seams ending at the shoulder, are the best to create shaping in a French jacket. I own lots of beautiful jacket patterns but most of them had design details like yokes or double darts in front and back that made them useless for this project. Guess what I ended up with: V7975. Quelle surprise! 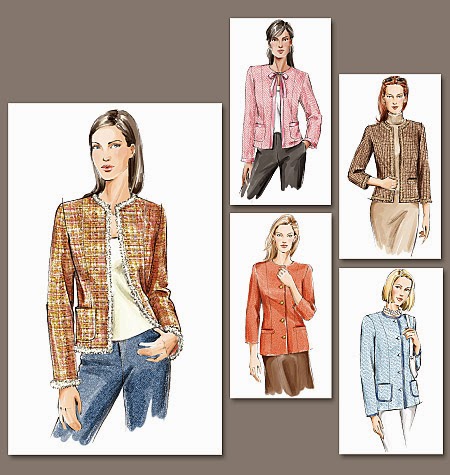 After mixing up all views I'll make the longer jacket with abutting front edges and bracelet length sleeves. I redrafted the neckline to a v-neck.

I found my fabrics at Harry's Stoffen in Enschede, The Netherlands. The cotton bouclé is very soft and the lining is so beautiful, love at first sight. My only regret is that I did not think of buying more to make a matching blouse. Unfortunately it is out of stock now. It will be a pleasure to look at those colourful flowers during my countless hours of hand stitching! 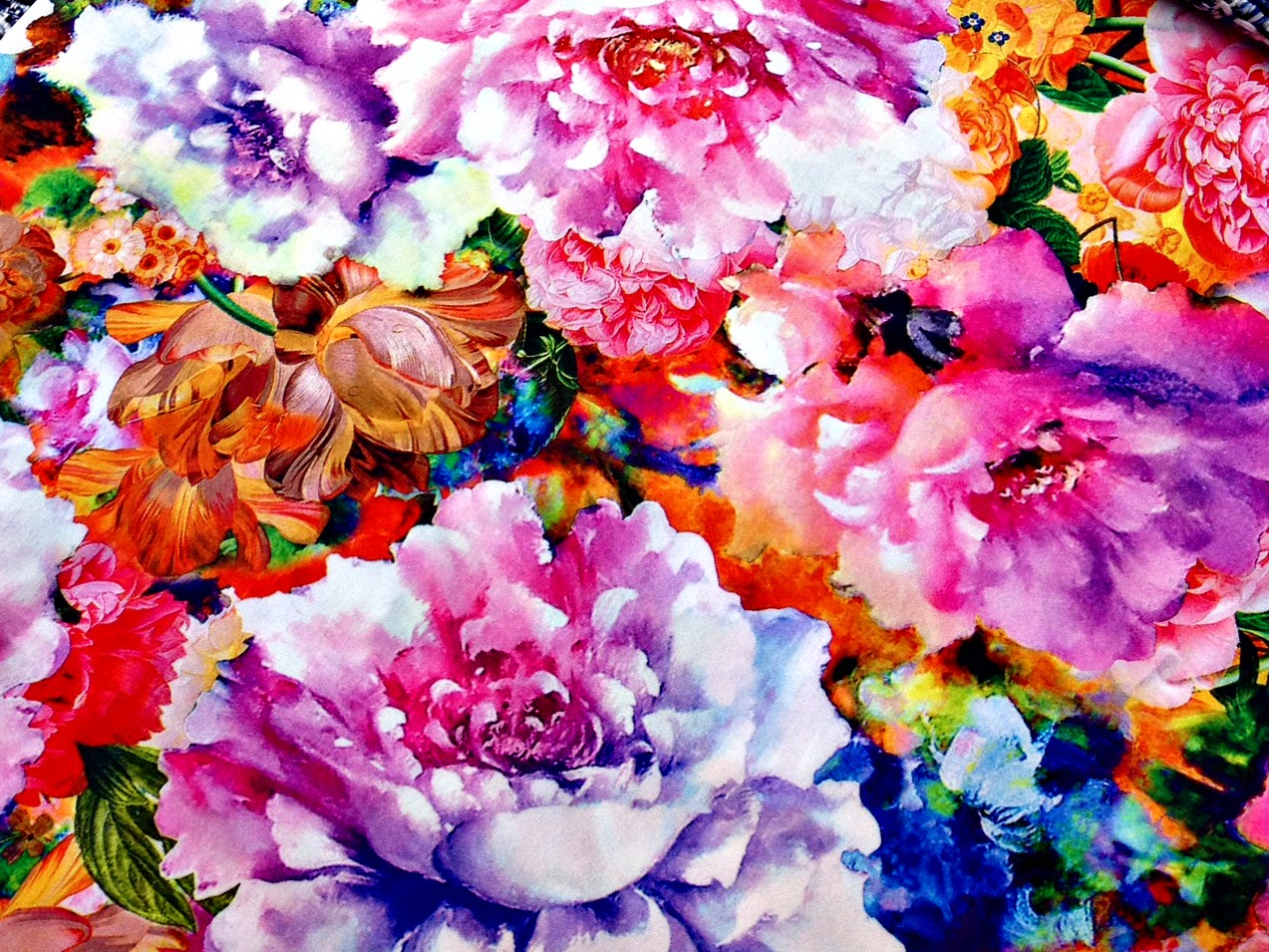