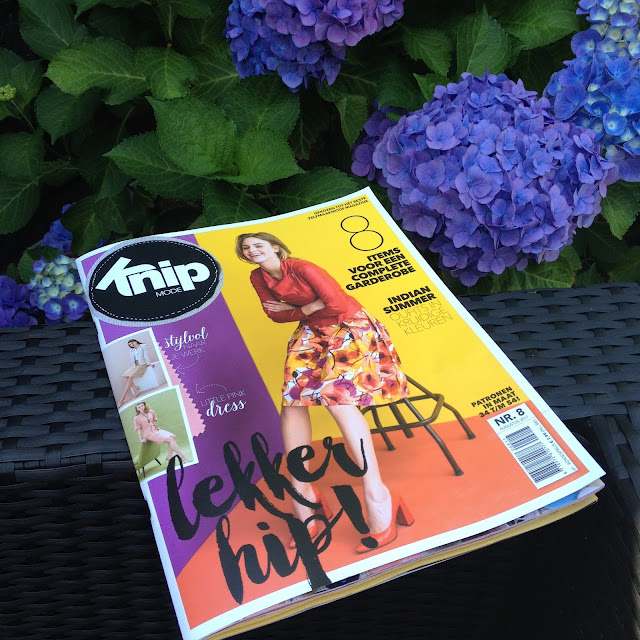 The August issue of Knipmode can best be described as the pre-fall collection. Brrr, fall? It feels like summer still hasn't started properly in The Netherlands. It's been a strange season so far! 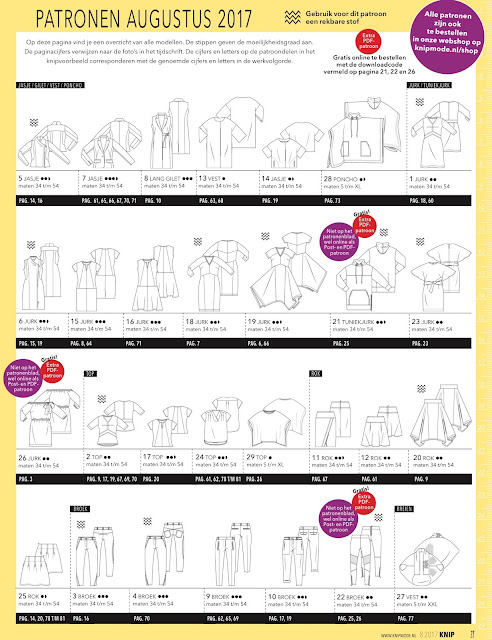 What's new? All patterns shown in the magazine used to be included on the tracing sheets. But not anymore. Three patterns, the ones marked with the red and and purple dot, have to be downloaded as pdf, free with a code included in the magazine.

It looks like Knipmode is hoping to spark more interest in their pdf patterns, which I can understand. But it's my opinion that by doing it via the magazine they're barking up the wrong tree.

Traditionally Dutch sewists are tracers. My grandmother traced, my mom traced and now my daughters also trace their patterns. Pattern magazines are available in most supermarkets and bookshops and they're cheap. A single copy of Knipmode will set you back 7,99 euro for about 25 new patterns. My subscription costs only 3 euro per magazine. Even when there's nothing in the magazine that I want to make I consider that 3 euro money well spent as I like to read about trends, look at new fabric collections and accessories.
The price of a single pdf pattern is 4,95 euro. Very reasonable, compared to the prices of other pattern companies. But compared to the price of the magazine it is steep.
I have never bought a Knipmode pdf and it's not likely I will do so as long as the magazine is around.

I do buy pdf patterns from companies in Australia and the US. No postage and instant gratification makes it worth my while to go through the tedious printing and taping process. I can absolutely see how that could work the other way around and sewists from other parts of the world would love to buy Knipmode pdf's instead of waiting for the magazine to arrive.
I contacted Knipmode two years ago to inform them about the growing amount of messages I got from sewing friends all over the world who couldn't find their way around the Knipmode website. It is rather difficult to order a subscription or pattern when you don't speak Dutch. Wouldn't it be wise to make an English version of the website? I never got an answer to this email. Typical. Lately Knipmode is spending money on nondescript vlogs in Dutch, excluding foreign sewists even more.
The recent launch and blogtour of the English edition of Belgian pattern magazine La Maison Victor got a lot of attention in the online sewing world. Maybe it's time for Knipmode to reconsider the navel gazing and start making the site and shop more user friendly for those of you that would love to try the patterns but are discouraged by the Dutch language.

In the meantime Dutch readers are not impressed by Knipmode's move. I've seen comments by readers saying they don't have access to a printer, others don't consider the pdf's free because of the cost of toner and paper. The editoral staff insists the free pdf's are extra patterns that couldn't be placed on the tracing papers. Fact checking: the August 2016 magazine contained 26 patterns. August 2017: 25 patterns + 3 pdf + 1 knitting pattern, At first glance there are indeed more patterns, however, some are just different views of the same model. Obviously top 2 is a shorter version of dress 1 and as far as I can see the only difference between trousers 3 and 4 are the pockets, to name a few.
We'll see how this evolves.

On to the collections! 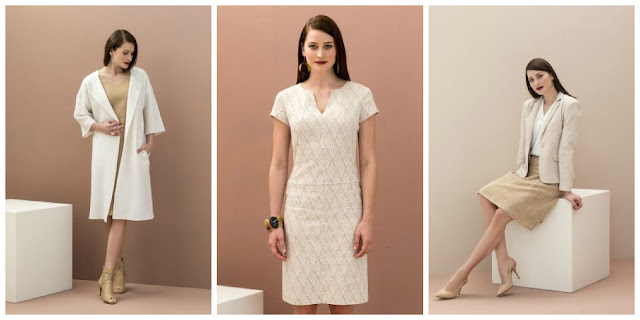 A classic collection in ivory and camel. From left to right cardigan 13, dress 15 and and jacket 7, skirt 12 and top 24. I do like the seam lines of dress 15, although the details are hard to see. 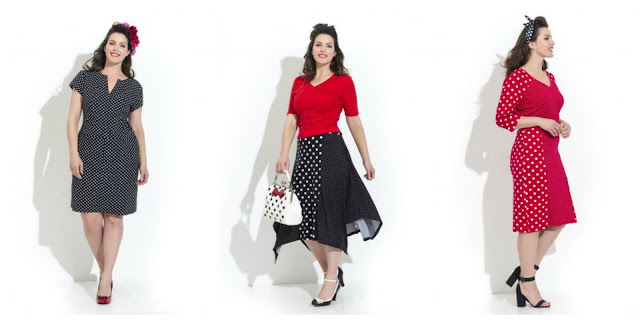 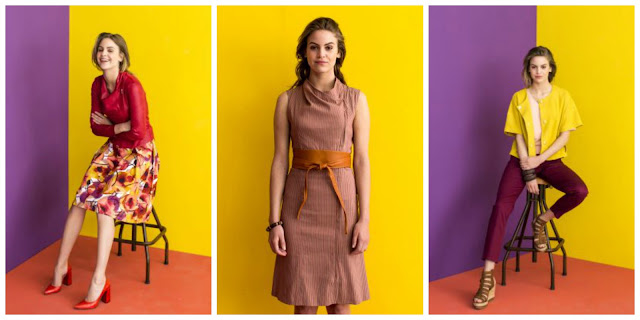 Jacket 5 (left) has an interesting collar and asymmetric zipper. As much as I like the look, I do have some reservations about this pattern. The jacket is unlined, which I don't find very comfortable to wear considering it's made of faux leather. When you take a close look at the dress in the middle you can see that it's made from the same pattern. I don't know about you, but I like my jackets to have more wearing ease than my dresses! Trousers 10 (on the right) are on my shortlist. 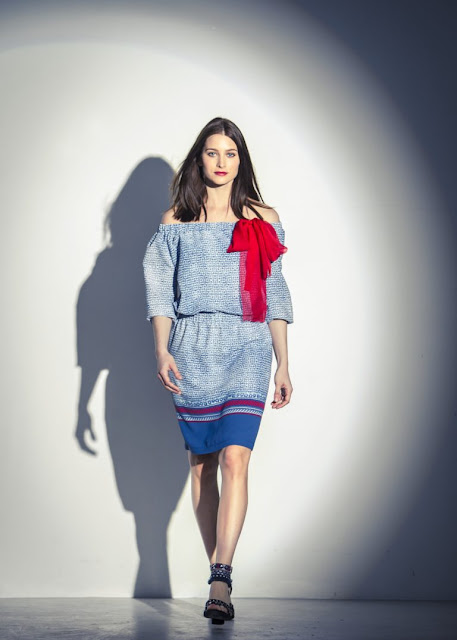 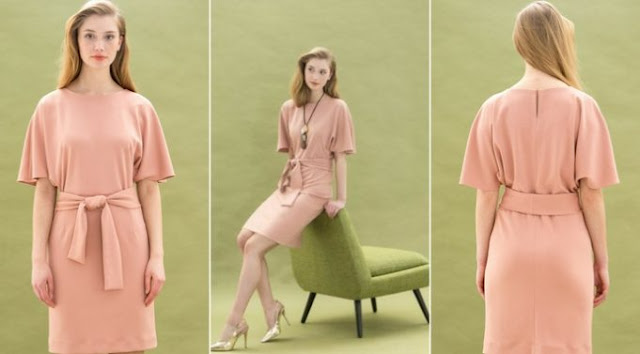 I've seen some lovely versions of dress 23 pop up on social media. I expect this dress to show up soon on the blog of my Bavarian sewing pal Chris at https://handmadebychris.wordpress.com/ 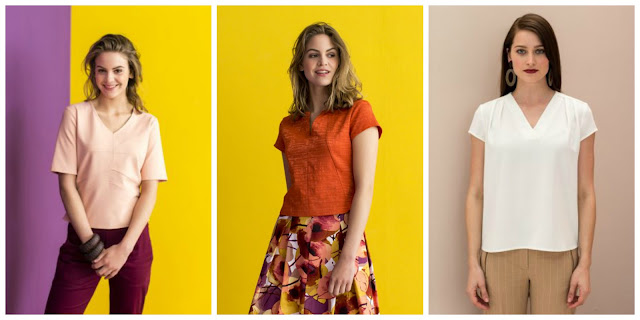 At the beginning of the year I set myself a challenge to sew more Knipmode patterns. At the moment I'm experimenting to improve the bodice fit. Knipmode drafts for a B-cup, which means I need a serious FBA as I'm wearing a H-cup. I'm considering making pattern adjustments to these three tops, from left to right top 2, top 17 and top 24. The first one is a knit pattern, the other two are for woven fabric. With horizontal darts, diagonal seams and shoulder pleats these patterns all need a different FBA approach. 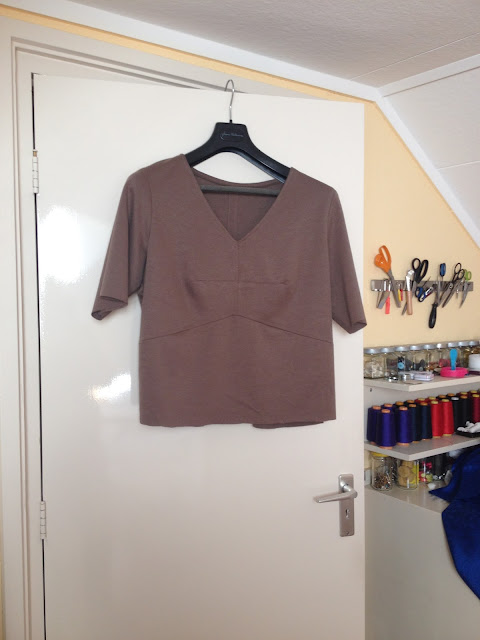 So far I finished a muslin of top 2. Not too bad, but a little snug. I'll check again when I've had more time to deal with the inevitable extra pounds I took home from my culinary Belgian holiday.


Disclaimer: this review contains no affiliate links. I paid for my copy and all opinions are my own. Photocredits: Knipmode