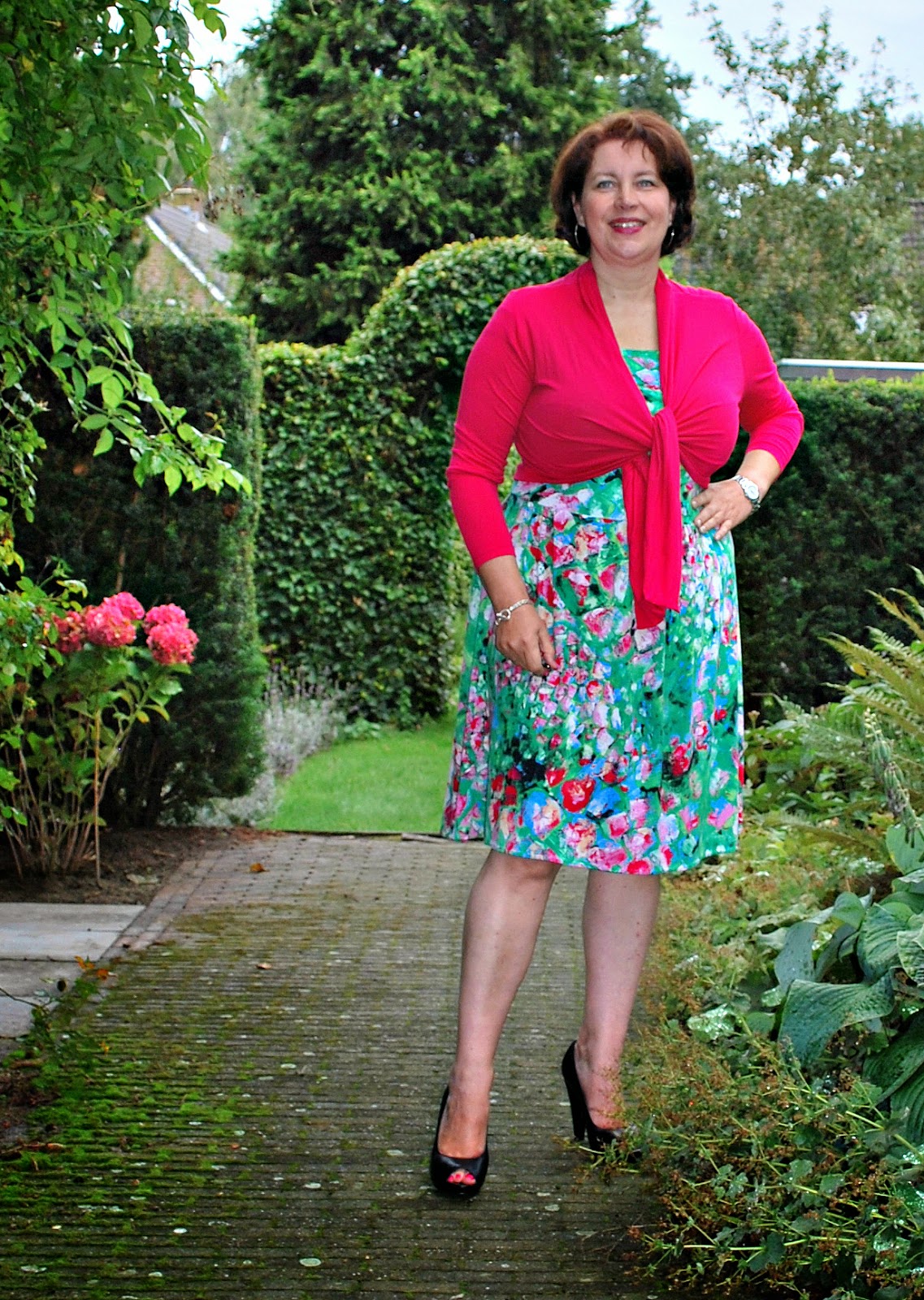 To get some more wear out of my summer dress I refashioned a cardigan. It was a long and oversized RTW cardigan that just wasn't working for me. I forgot to take 'before' pictures, but the wonky hemline hit sort of just above the knee. I shortened it about 20 inches / 50 cm and used the cut offs for a 2 inch / 5 cm wide band to finish the hem and to make the ties. Easy job, but I'm really happy with the result. 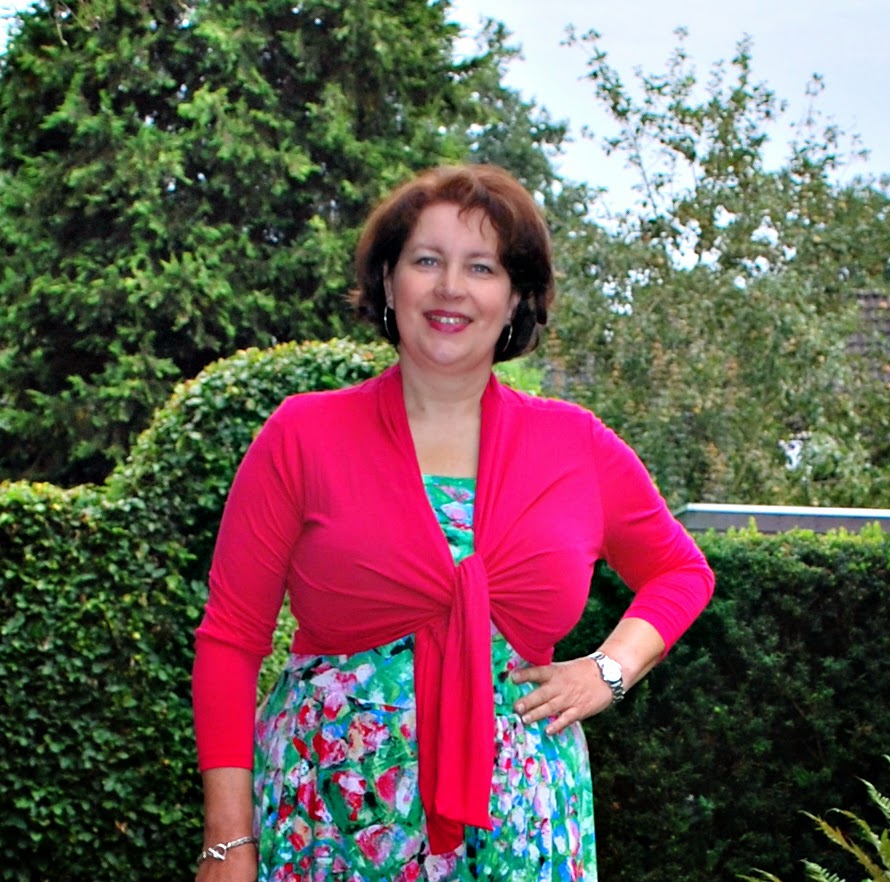 Have a nice weekend! 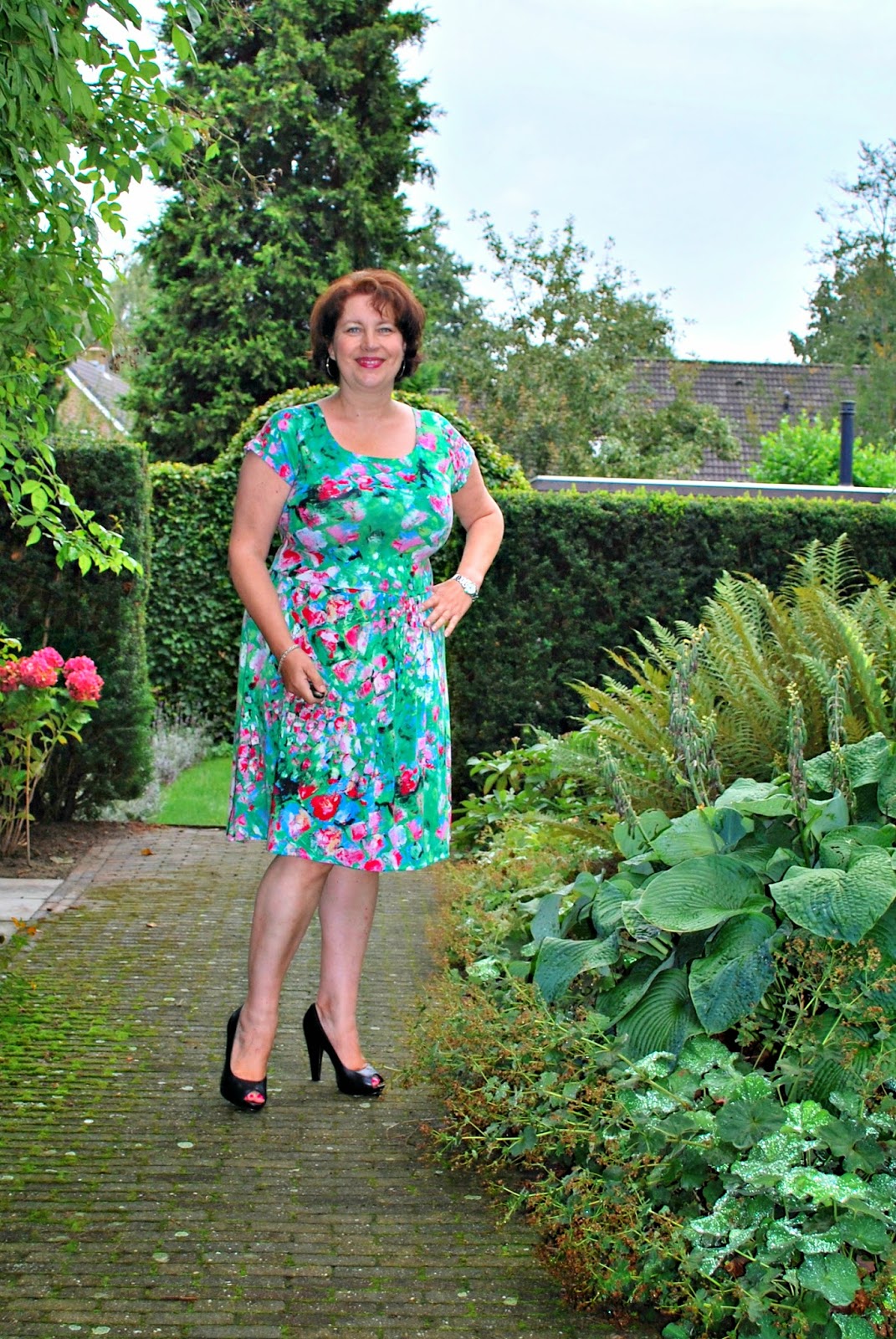 Speaking of lousy timing! Just when temperatures dropped to an all time low for August I finished my sundress. Well, as you all know, Murphy was to blame for that. But never mind, at last we have a dress to discuss! It's a Moneta. Again? Yes! And thank you Handmade Jane for giving me an alibi to use this pattern for the third time this summer. I've been wearing my Floral frenzy Moneta to death and my Lace Moneta has been out for special occasions like ballet performances, concerts and dinner parties. So why not make another one?

The fabric is a lightweight cotton jersey. I lined the bodice to get a clean neckline finish and I changed the sleeves to capsleeves. I lowered the front neckline (about an inch) and looking at the finished neckline I wish I'd lowered it a bit more. 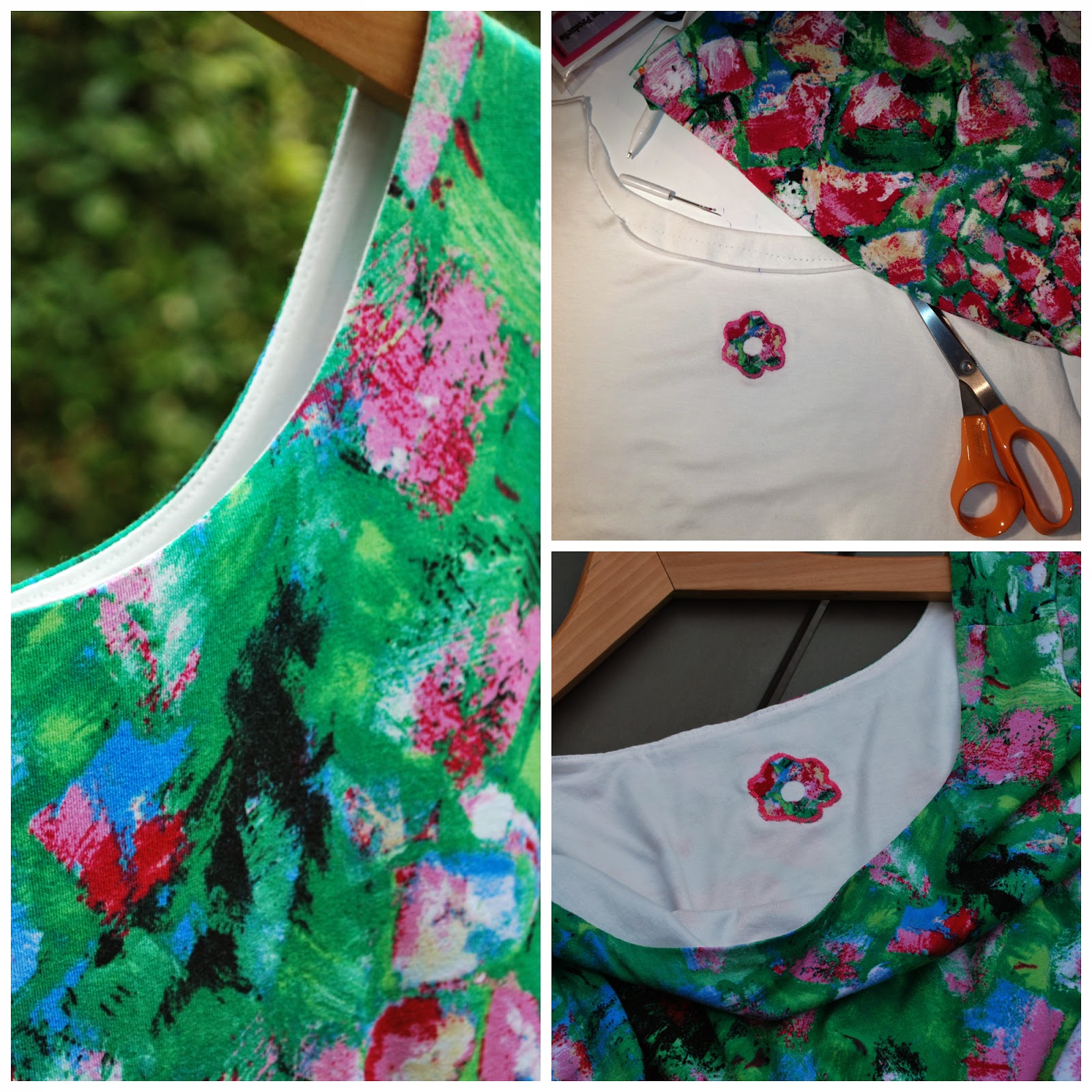 The picture on the left shows there is hardly any difference between the front and back neckline. To make dressing less confusing in the foggy state of mind before my double espresso I added a little landmark. A simple cross stitch would do, but I'm such a fool for silly additions. For me this kind of detail transforms an ill fitting, grossly overpriced RTW garment into a must-have in the blink of an eye.

Well, construction wise this flower was the only highlight worth mentioning. Some pictures of the inside:

I asked my husband whether he liked my new dress. "New dress? You're kidding me! I've seen that one before!" I'd like to think this means I've nailed my signature style but maybe it's a sign I've used this pattern one time too many. Ouch!
I hate being predictable. So let's end with an innovation! Instead of kicking my tripod just outside the kitchen door and take some pictures on the usual spot I experimented. Yeah. That's why there are no pics of the back available, all out of focus or headless. But to show I'm no one trick pony I even tried a new pose! See? 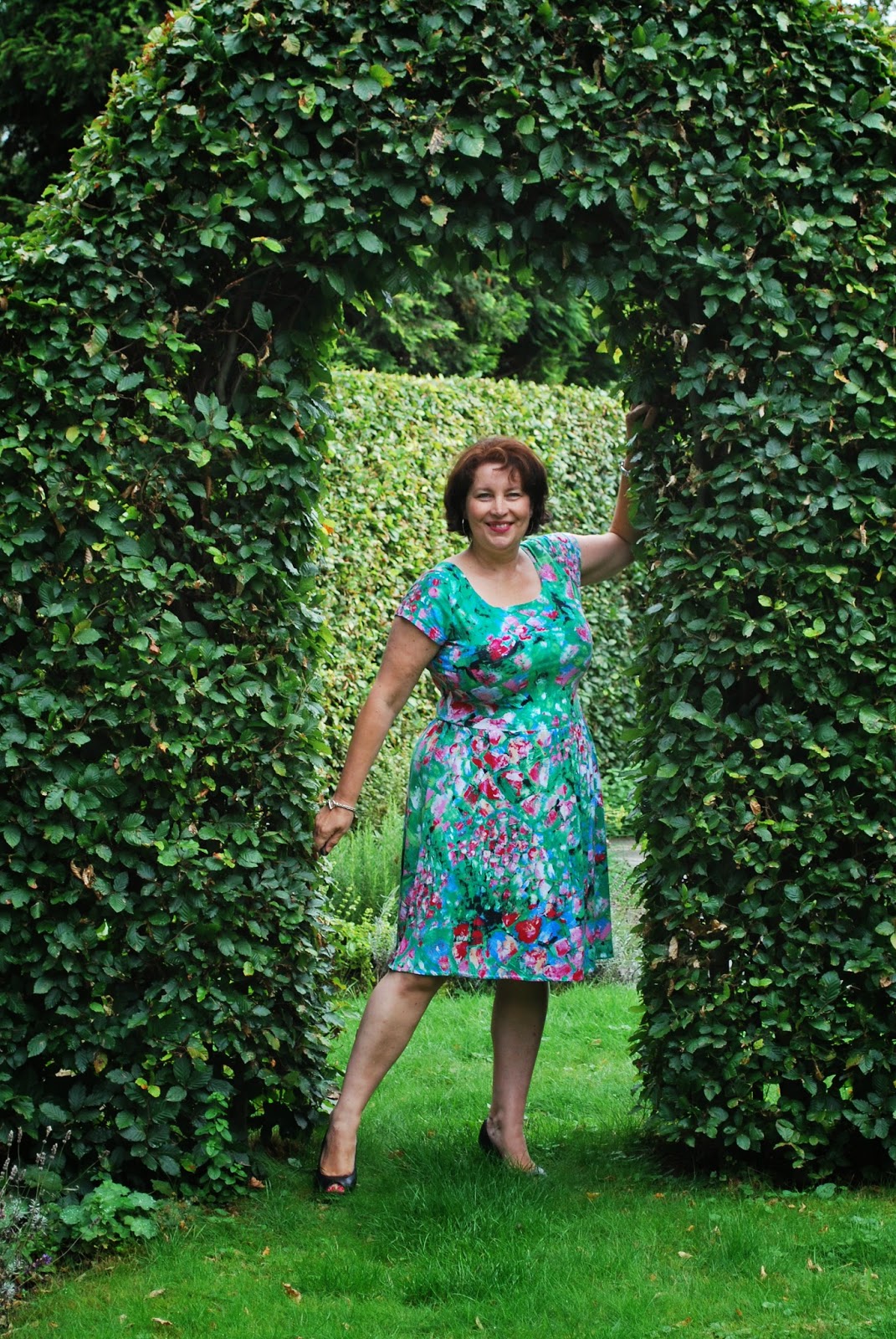 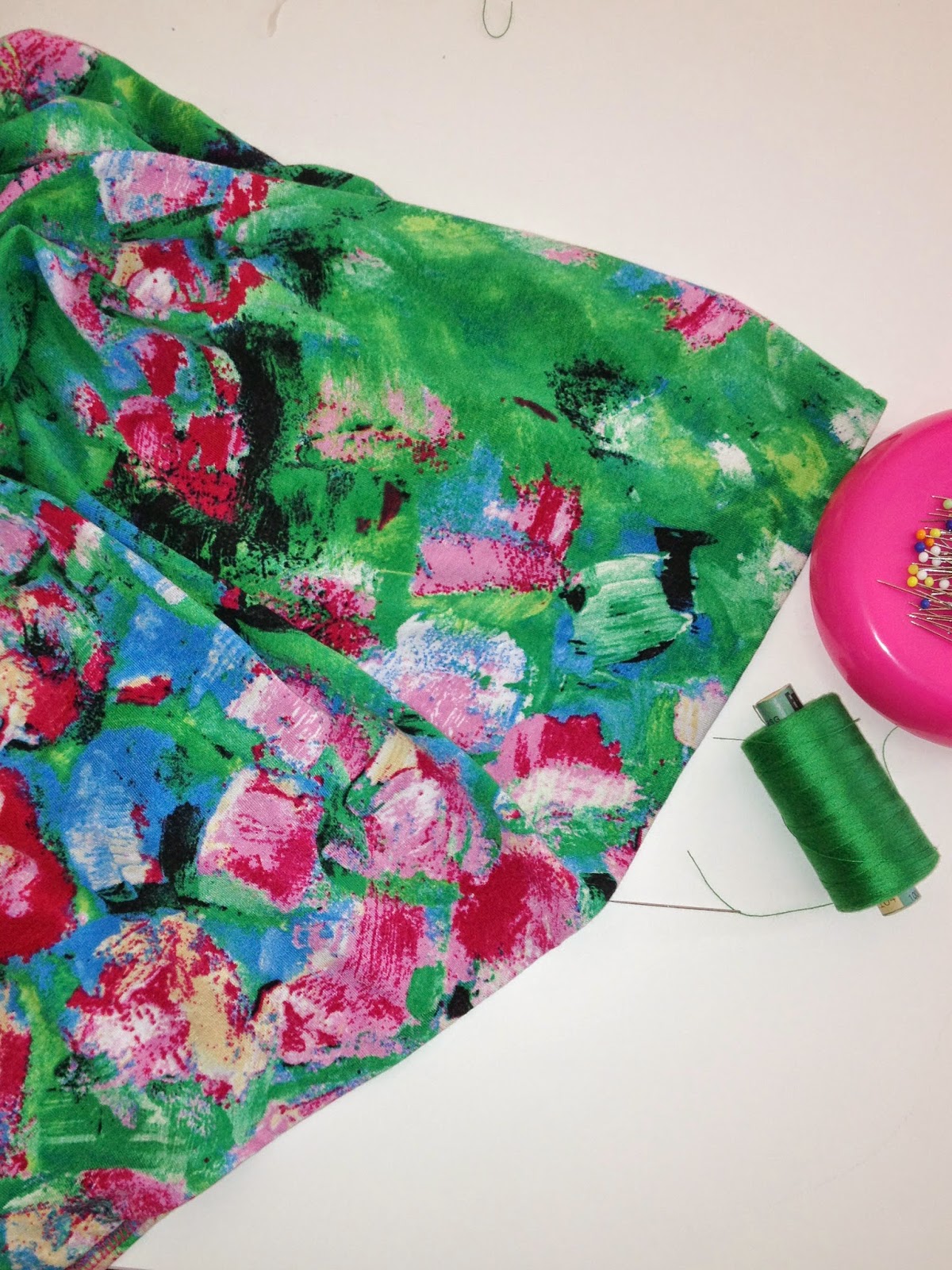 Back in June, when Heather launched the summer sundress sew-a-long, I was one of the first to sign up. An August deadline? Ample time to sew a carload of sundresses! Or?
For one reason or another I wanted butterfly fabric for my sundress, nothing else would do. 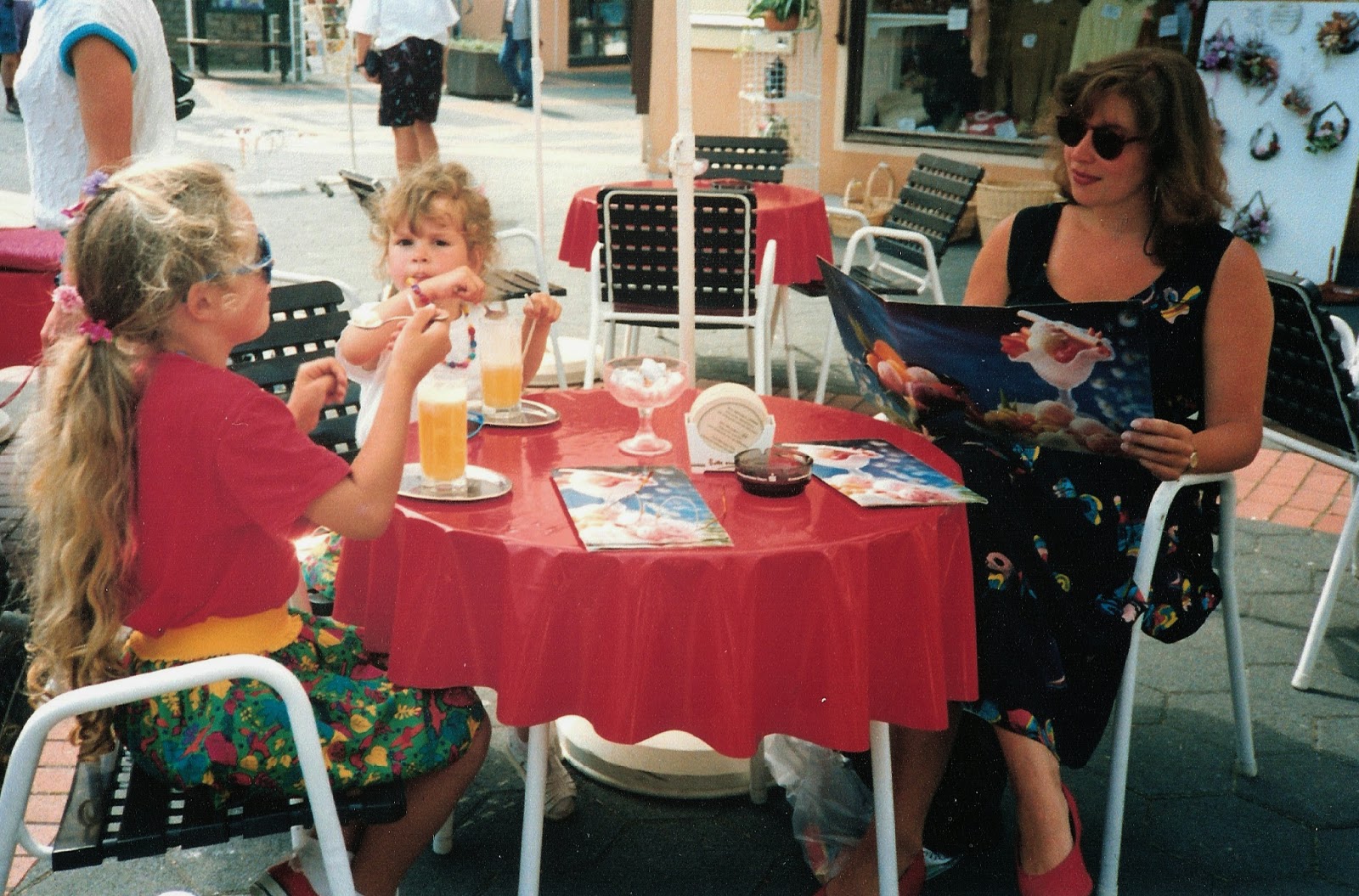 When I found this picture I realized I'd unconsciously been looking to reproduce a favorite dress from way back, when Canal Couture and Sartorial Sweatshop were very cute little girls with a love for icecream and colorful hair accessories.

That dress deserved a remake! I visited every fabric store and market I could think of, but no sign of butterfly fabric. Finally I tracked down this Robert Kaufman fabric in Hong Kong. 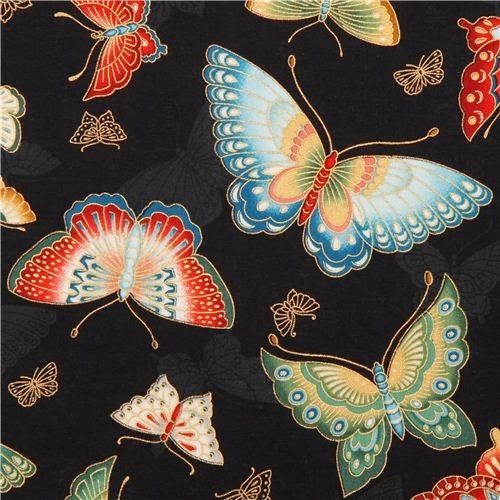 This beautiful print with tiny golden details was certainly worth waiting for. In the meantime I ordered a sundress pattern from a Dutch online store. Not the cheapest option, but it was in stock and should arrive the next day. 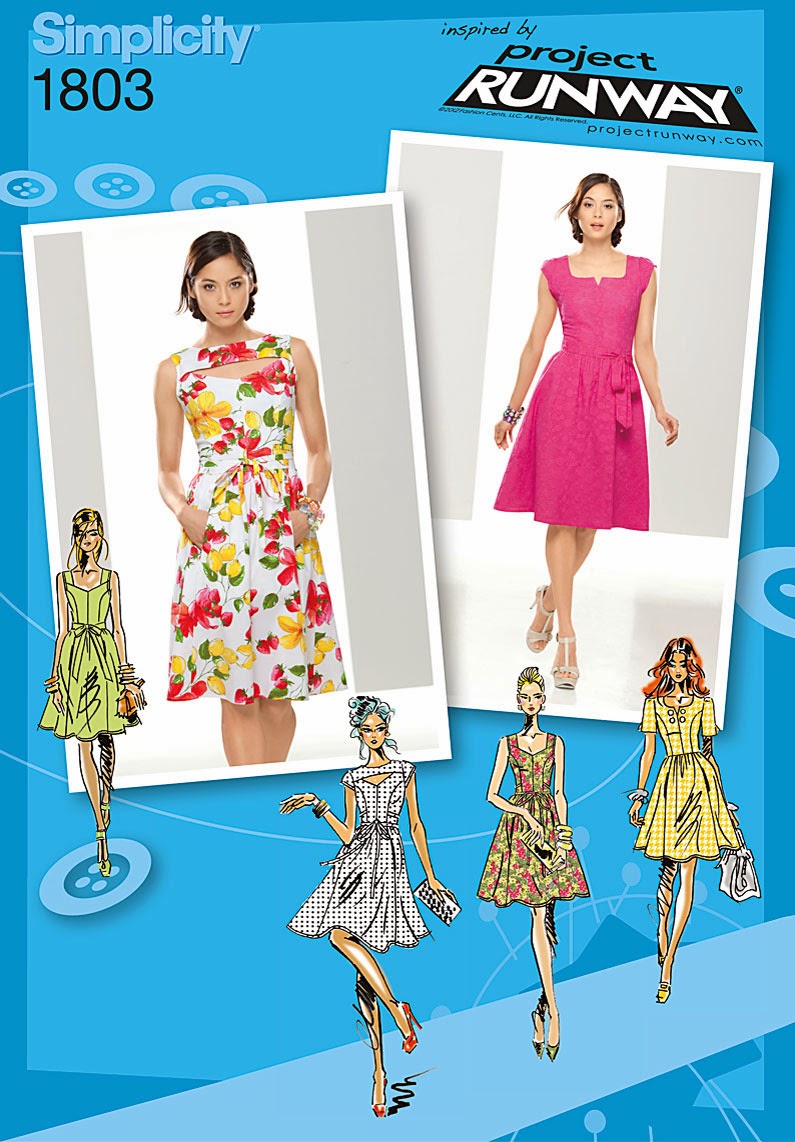 Oops, sorry! Did we say in stock? We meant to say it was on backorder!
Three weeks later: still on backorder.

June turned into July and we were in the middle of a heatwave. I really needed that new sundress! Plan B: 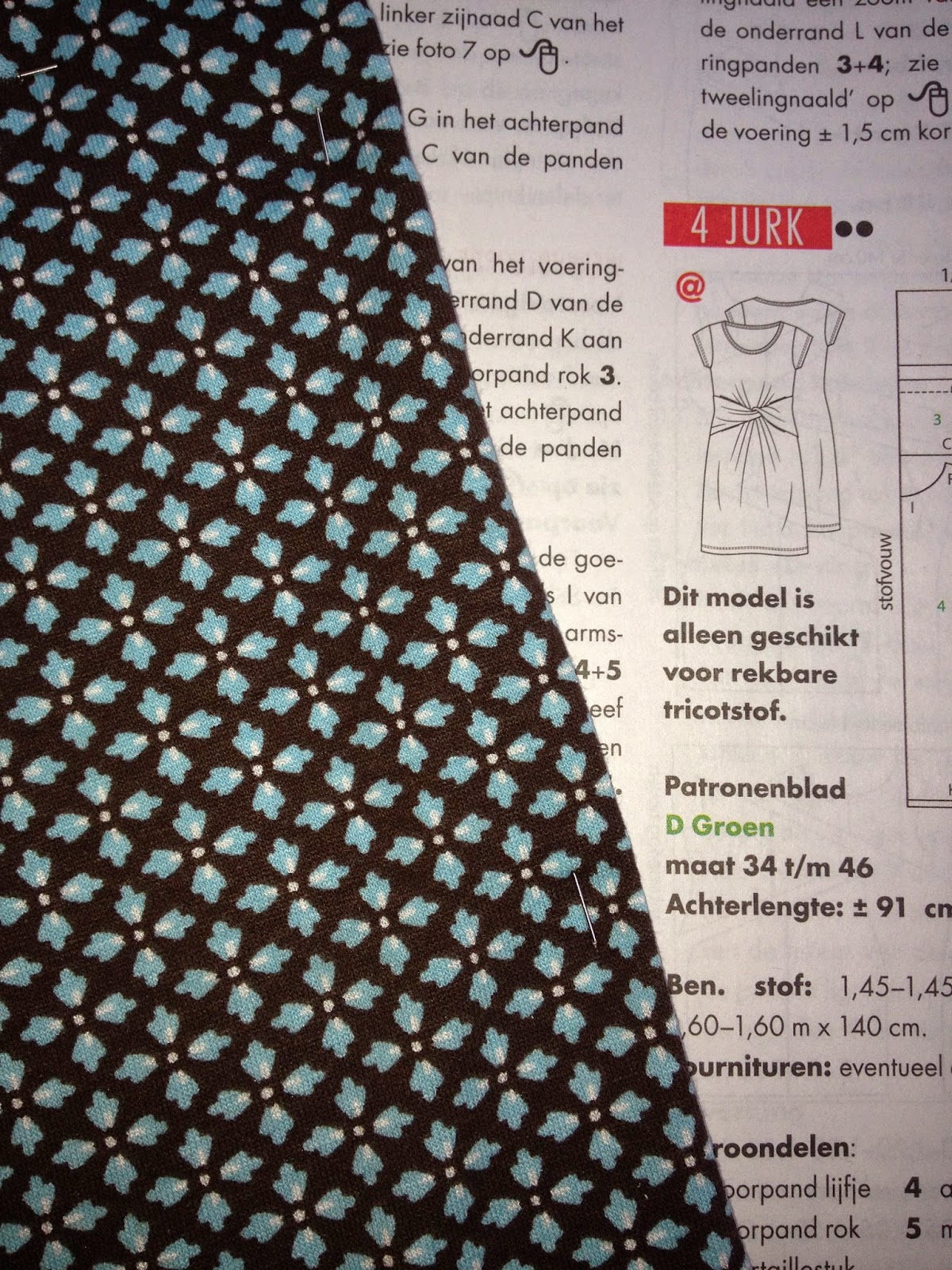 A Knipmode dress and a cotton jersey. Nice pattern, beautiful fabric but bad pairing of the two. Plan B was a mess. 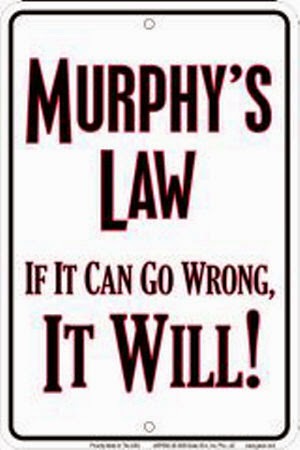 Still no sign of Simplicity 1803. Mind you, I paid the equivalent of $22 for that silly no show pattern! Some phone calls later I discovered someone in the shop mixed up pattern codes. To make things worse: it had been in stock all the time but I could have waited till Christmas without anyone noticing.
But, allways look at the bright side of life: the number one project in the 2015 summer sewing queue is ready for take off!

Now August arrived and I still did not make a new sundress.
Time for plan C: another cotton jersey and a TNT pattern, see the first picture of this post.

As soon as I started cutting this dress the weather changed from unusually hot to pretty bad, even for Dutch standards. It's the coldest August since 1924. So let's put another log on the fire while I'm finally hemming my sundress!

My thread stash was outgrowing it's dedicated space. Well, not just the thread stash, but for the sake of the year of No Rules in the sewing room I will deal with my fabric stash in due time. Promise.
I prefer to keep my thread in boxes, unfortunately the ones I picked last year were getting overcrowded to a point where searching for the right colour became a nuisance. 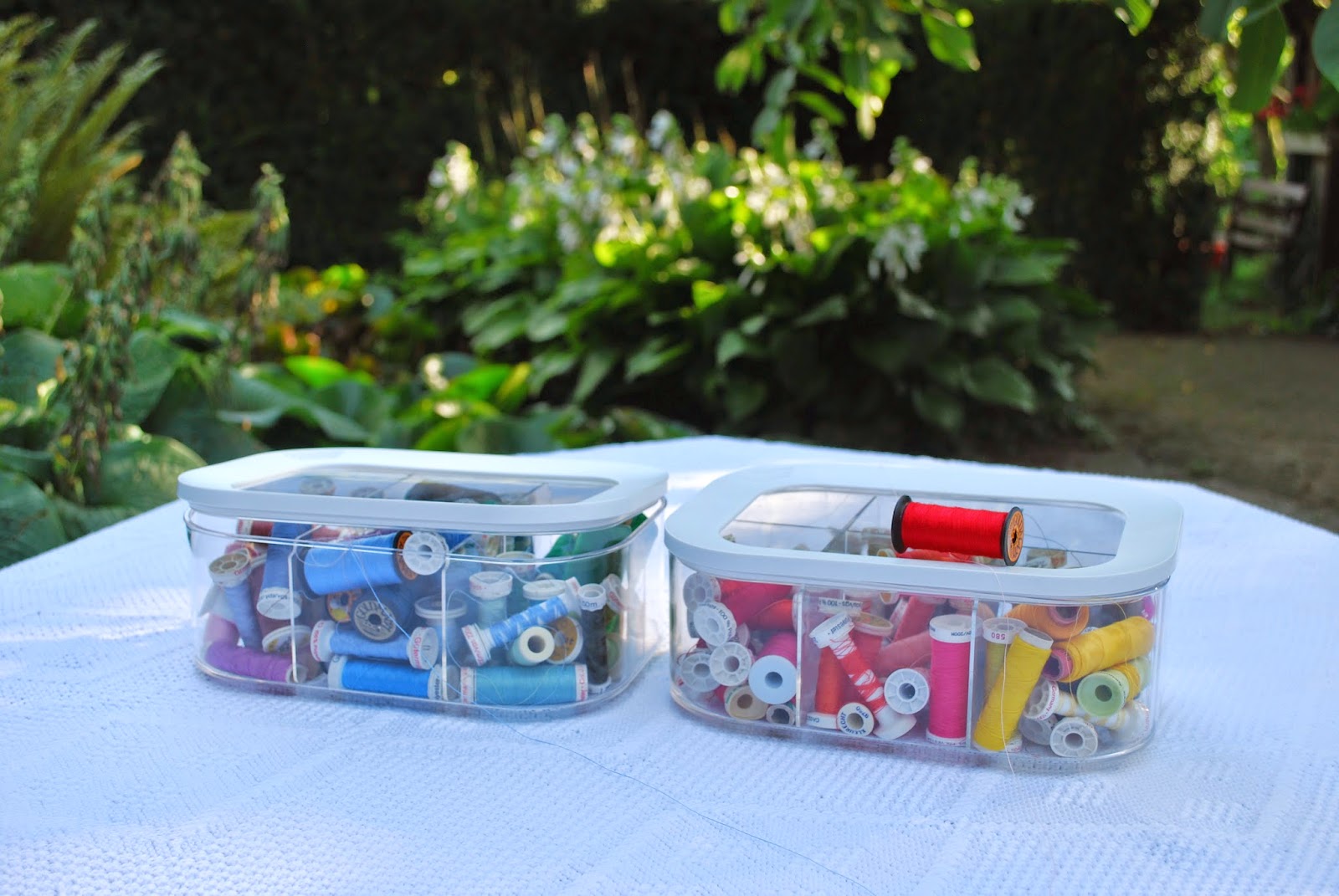 Luckily I found some much bigger boxes at the sale of HEMA, a Dutch department store. I have no idea what these boxes were meant for (definitely nothing sewing related) but they proved to be the perfect height for Gutermann spools. 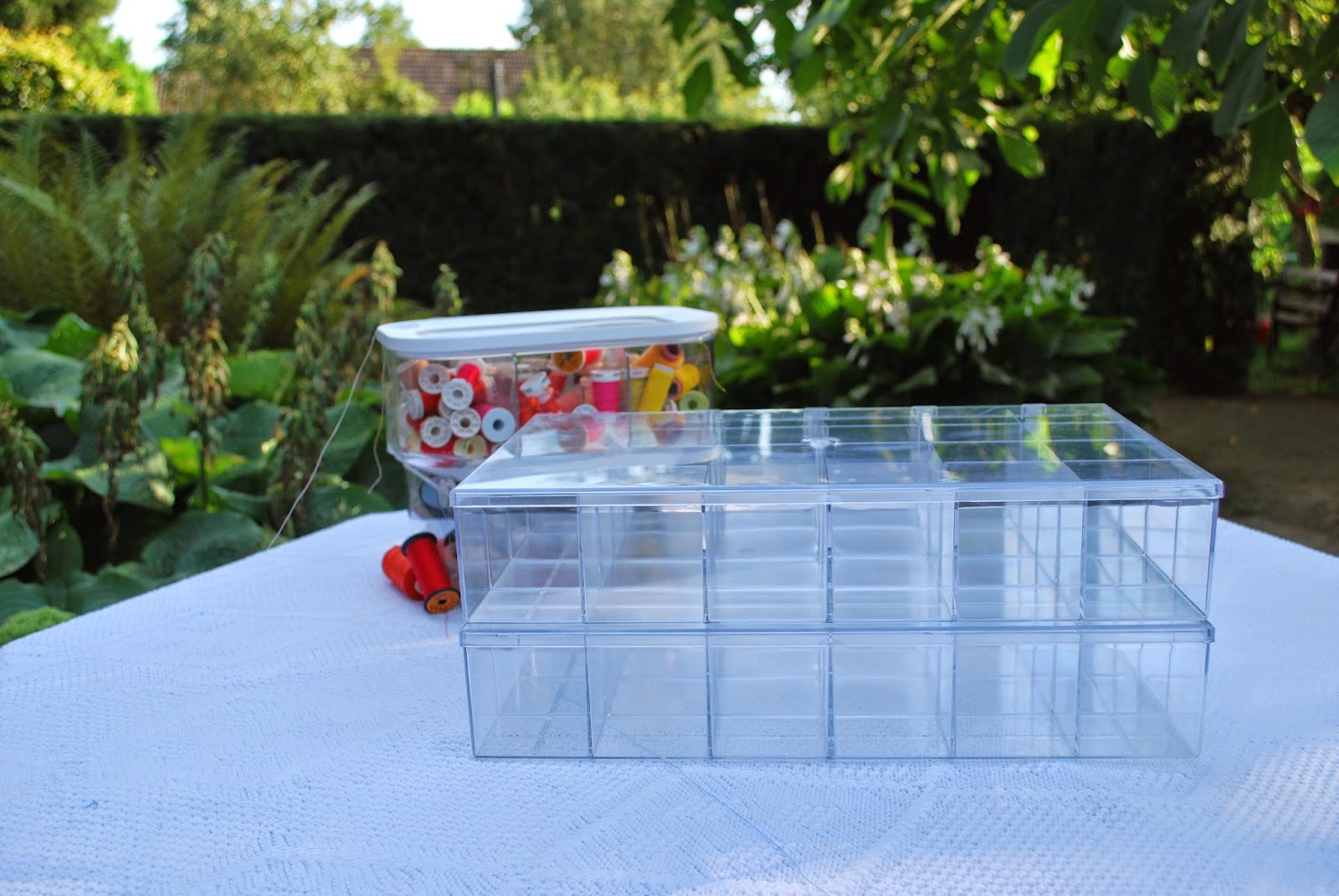 So after spending some quiet time near the pond I came up with this improved arrangement. 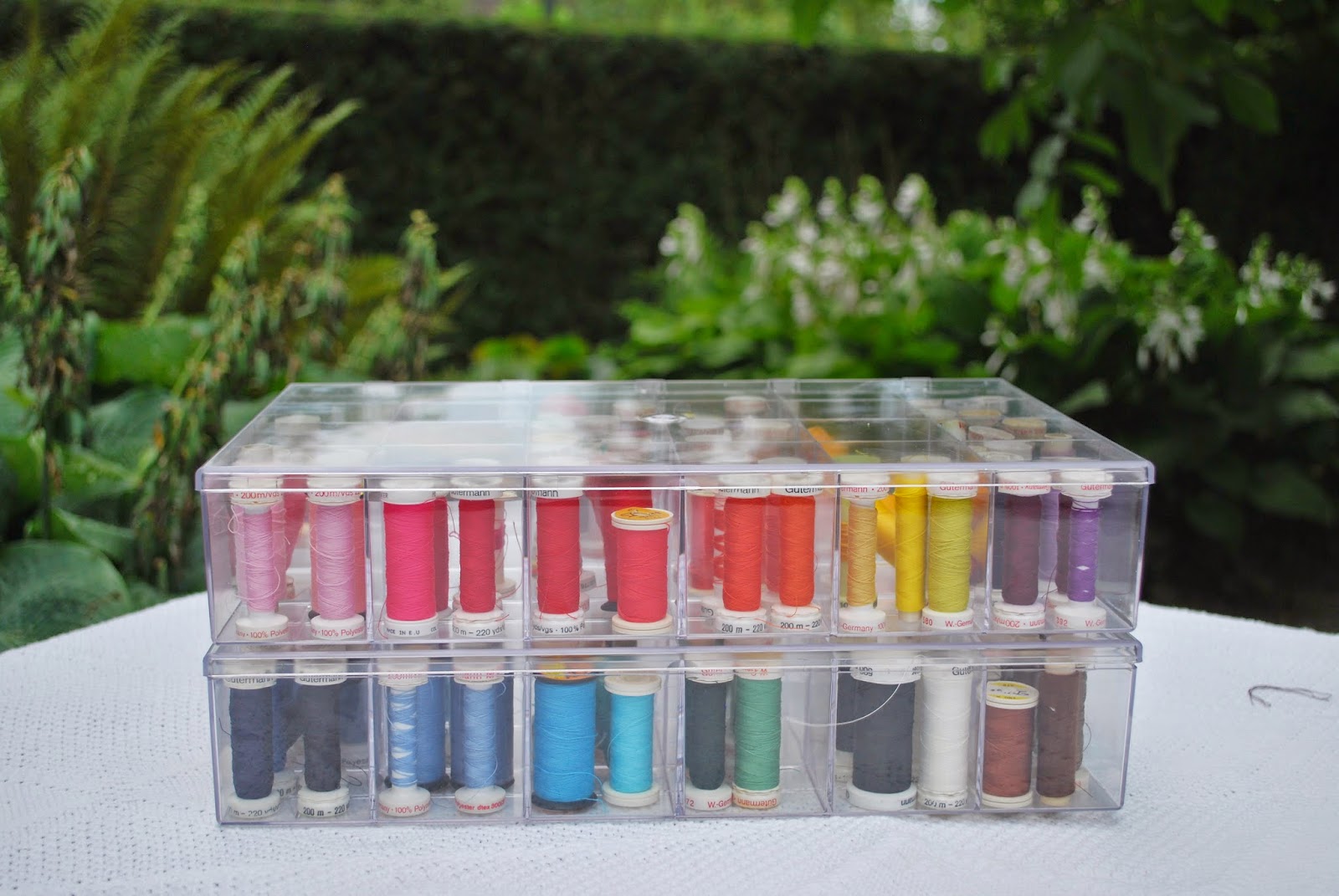 I also rearranged my machine needles. Am I the only one needing a magnifying glass to check the numbers on those unidentified needles that wander around my desk??
From now on I keep needles that have been used for just one project on a piece of pinked silk, next to their same sized pals. The yellow note on the cover tells me what needle is on duty in my machine right now. 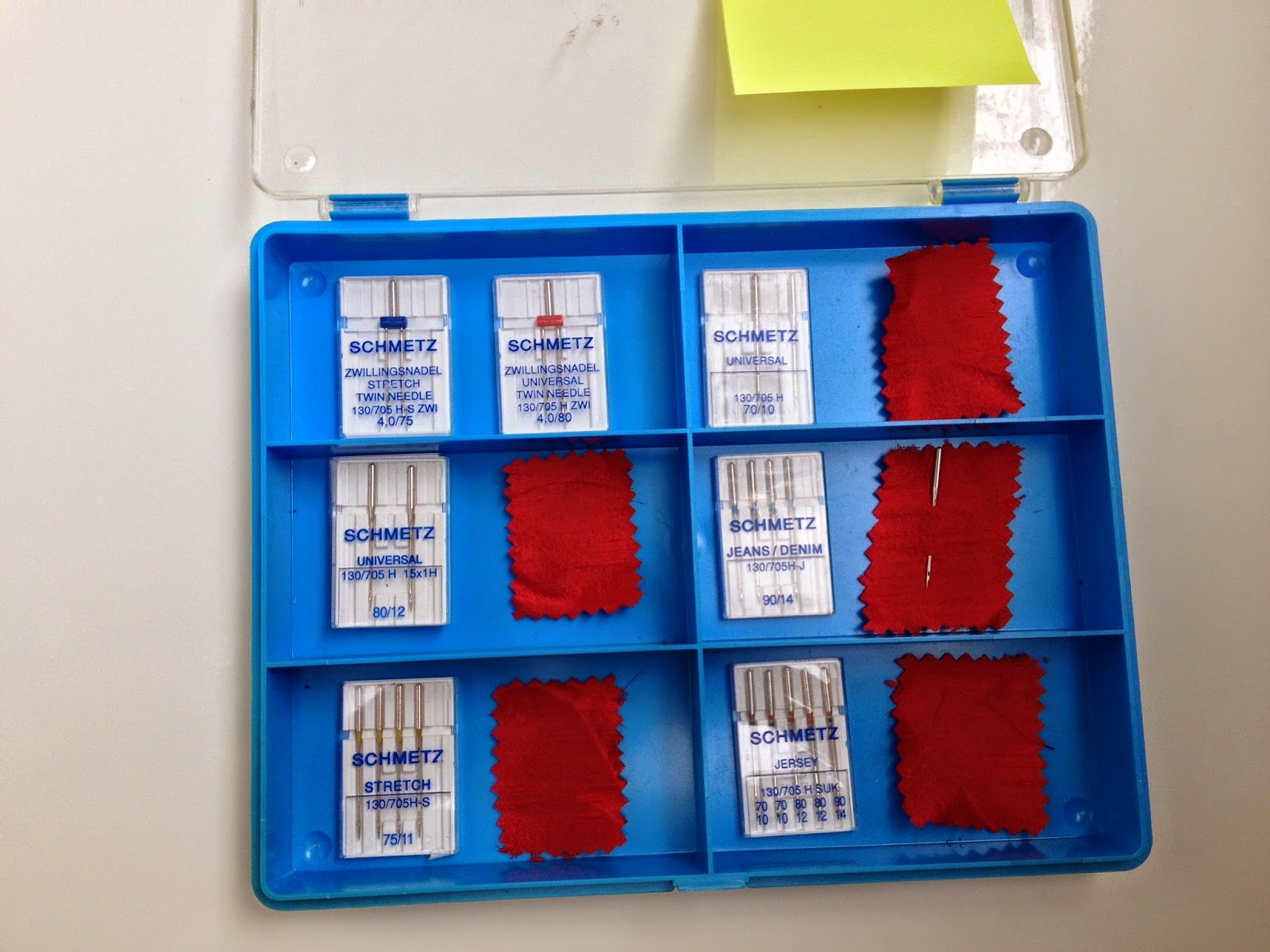 It looks like Schmetz is finally adding colour codes, but until all my needles have been replaced by this new type I'm relying on this system.

Sewing wise this was not the best of posts, but after our summer break both my sewing room and I are prepared for new adventures, starting tomorrow! 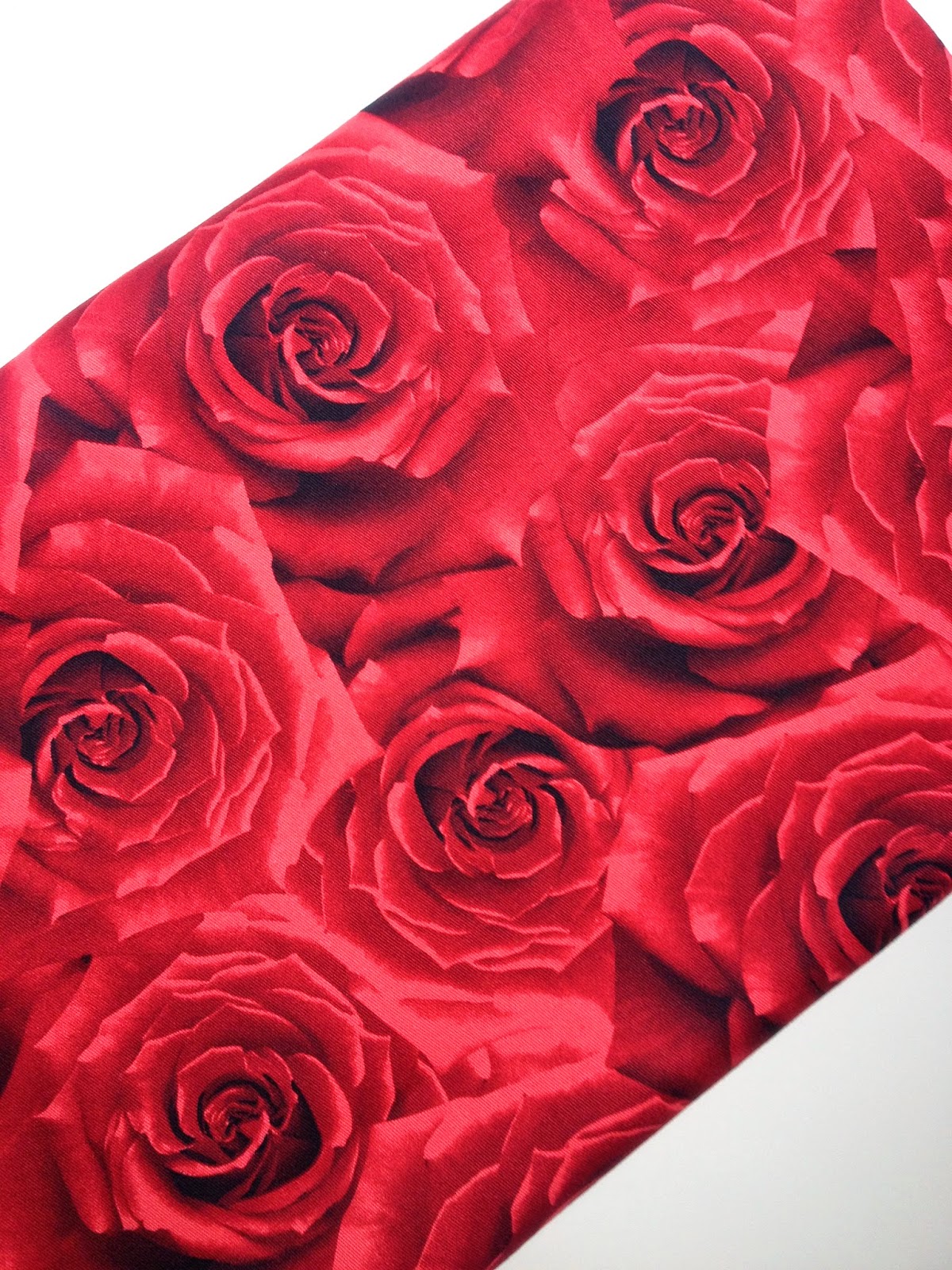 During summer there's always a battle going on between my foxgloves and my thimbles: the garden and the sewing room are fighting for my attention on a daily basis! Those of you who follow me on Instagram may have noticed an awful lot of harvesting, weeding and planting going on. Not that I'm complaining! Freshly picked black currants, raspberries, apples and blackberries make very good desserts and I baked a lot of pies. So, add a wonderful summer with warm, sunny days to the mix and you'll understand the garden won the first round.

But things are slowly changing. There has been some fabric shopping! This digital rose print was love at first sight. It's like you can touch the petals, feel the velvety surface and smell the rose fragrance. It's a stretch cotton and some day soon it will become a pencil skirt.

It's the first digital print that found it's way into my stash but it was soon followed by another piece. This next one is the 'love it or hate it' type of fabric. Warning, one might consider it a liiiiiitttttle bit over the top. 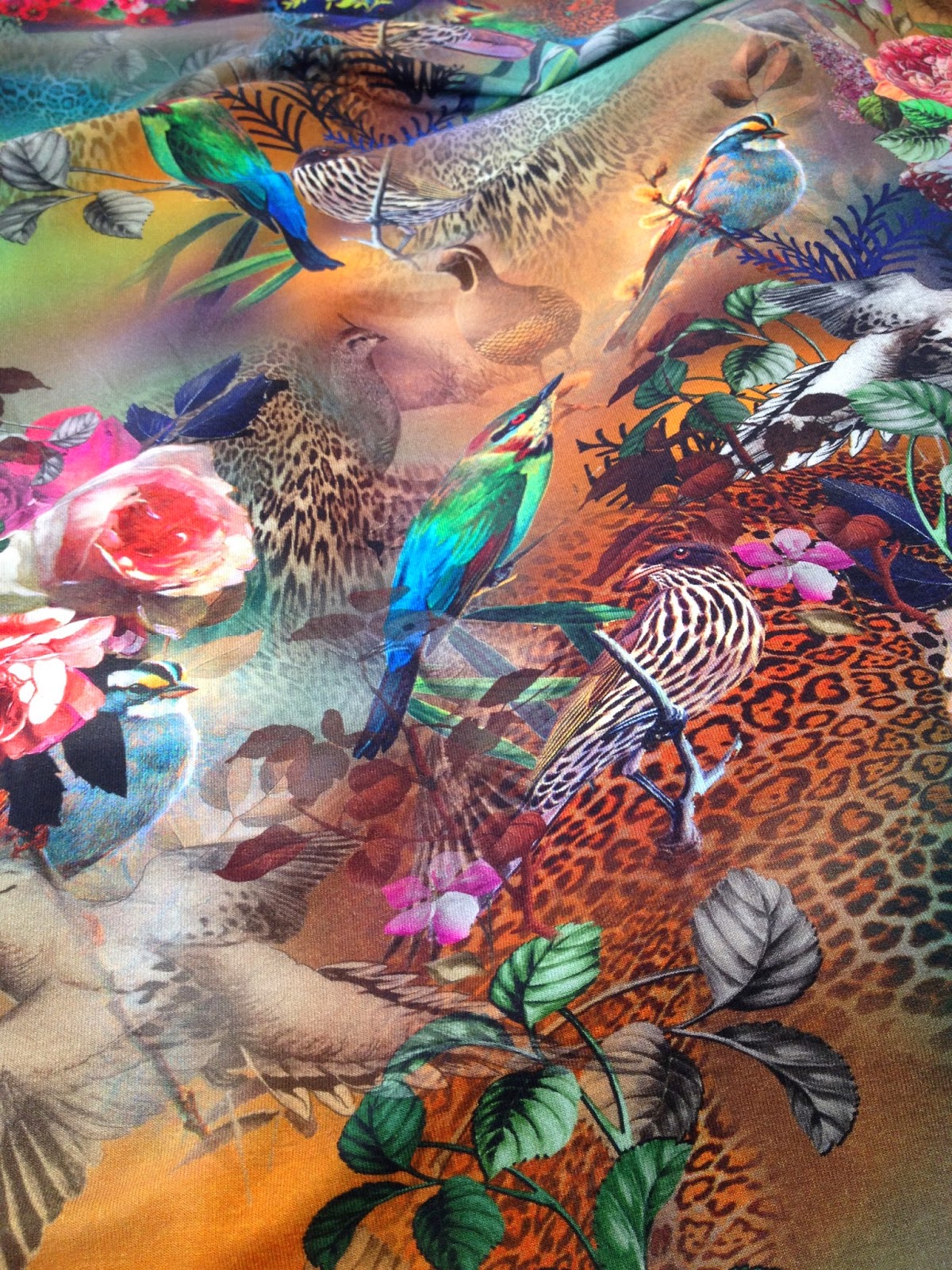 Yeah, it's LOUD! Like the designer could not stop adding features. Flowers? Check! Birds? Done! More birds? Why not? Antique vases? Yep! O, why not throw in some leopards?

As ridiculous as this print is, I just could not get it out of my head.
When fabric speaks, I obey.
So, perhaps Moneta #3?
To be continued!