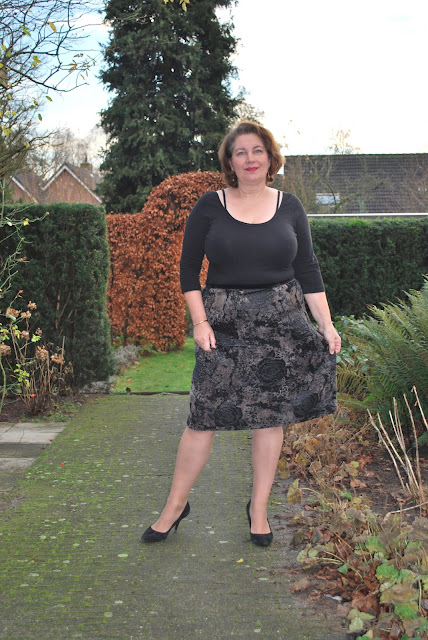 Look! Living proof that there's still some sewing going on chez Foxgloves! And it's a first, as I've surprised myself by making an A-line skirt. I can't remember ever owning one before. My skirts are either pencil skirts, half or 3/4 circle skirts or flowy gored skirts. Why not try some other styles?
When I saw the line drawings of an A-line skirt in the Knipmode December issue I remembered an end of the bolt piece of fabric that was waiting for the right pattern to come along. It's a mix of velvet and shiny jacquard roses and it was a dream to sew. 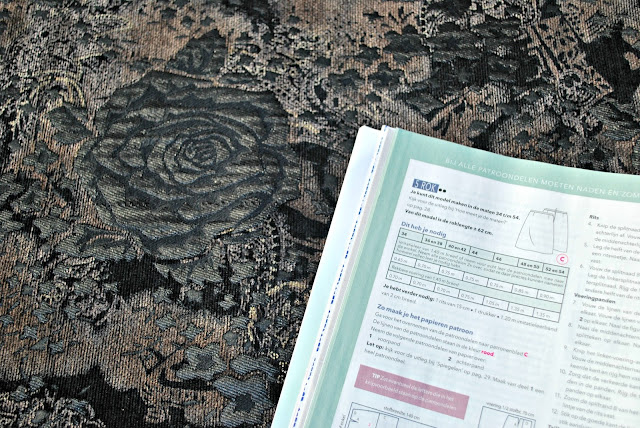 The only picture of the skirt in the magazine was this one: 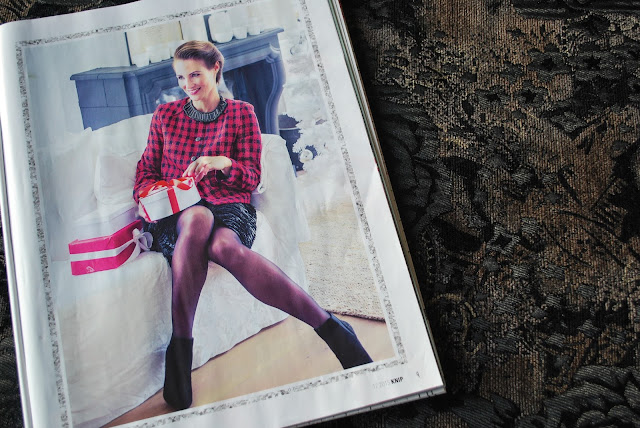 Not very helpful, to say the least. Fabric suggestions were a bit confusing. The cutting layout shows the skirt is cut on the cross grain of a non stretch fabric. Yet stretch lining was advised?? I could not think of any reason to follow that suggestion, especially as the only stretch lining I can get locally is the thin, clingy, inferior quality that doesn't go well with tights. I had some nice Bemberg lining in the stash that looked much better. Last change I made was to go for a black velvet waistband, instead of the pattern's faux leather. Much softer to the skin! 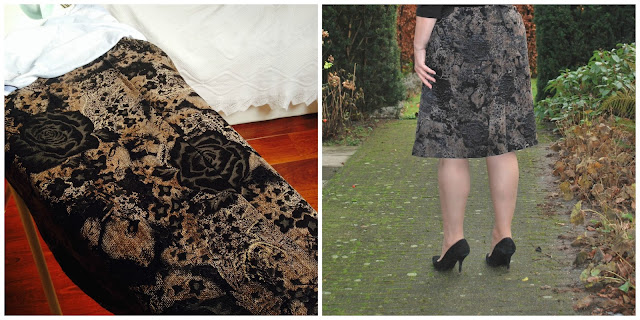 When you end up with some giant roses on your bum, pattern matching is a must. Even when there's not much fabric to work with. It kind of worked, and the lapped zipper is well hidden too. Hooray for busy prints! 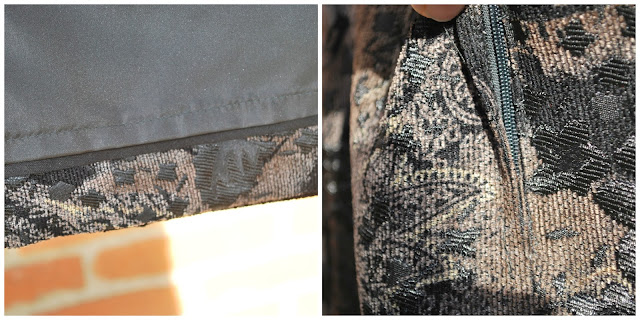 On the left you can just see the black bias tape I used to hem the outer shell. The lining could have been a tad longer, don't know what happened. Slight miscalculation I guess. On the right a close up of the lapped zipper. I hardly ever do this anymore, but for once I obediently followed instructions and I'm glad I did. Invisible zippers usually are my first choice, but on heavier fabrics the good old regular ones are a safer choice.
The fit of the skirt was spot on, I didn't change a thing!

When I use Knipmode patterns for a pencil skirt I usually have to change the hip curve, the drafted hip curve sits too low on me. No need to do so on an A-line. The skirt length, 62 cm, is the original length of the pattern. Knipmode drafts for 172 cm and I'm 173 cm, but from the picture in the magazine I could never have guessed that is was over the knee! (By the way, those are not bra straps. It's a shirt by Dutch designer Mart Visser with a double neckline band for special effects in front and back)

So. Now I'm the owner of my first A-line skirt. What else can I do with it?


What's the verdict? It's comfortable, the pattern was flawless and quick to make. I'm not sure about the A-line being the best shape for me, here's the same jacket paired with a pencil skirt, but let's see what I think after wearing this new to me style for a while.
I can think of more combinations to try out but this is as far I got before it started raining again.

That's all for now. I'm going back to the Donna Karan jacket I cut out last night, more on that soon!