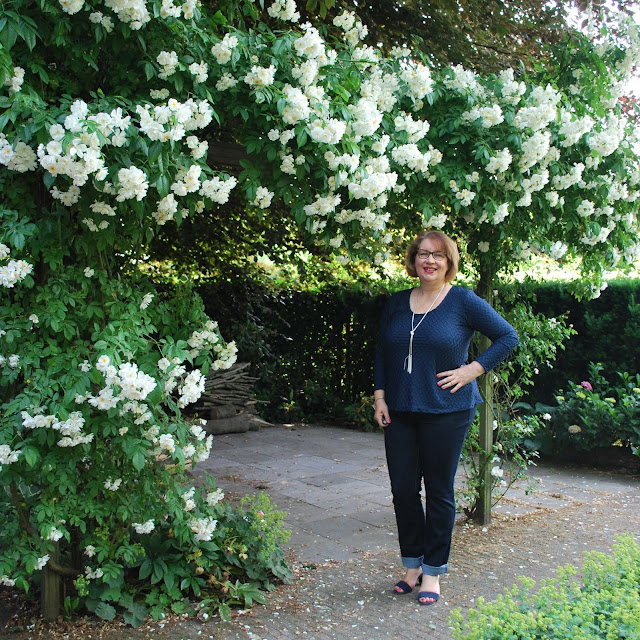 I've always considered taking pictures to be the bottleneck when it came to creating new blog posts. Apparently that's not entirely true, as I've had these pictures waiting for ages. So, what kept me from blogging for so long? Honestly? I sewed myself to sleep!

It's not that I didn't sew at all in recent months. But my choices were boring, like I was sewing on automatic pilot. Once I realised what was happening I made a few changes that will have a positive impact on my sewing for the coming years, but that's a subject for another post. For now I do have a few of those boring things to share. After all I use this blog to keep track of what I made, and when, and for the sake of keeping it real I think it's best to document less inspired moments as well.

So let's get this out of the way!

In June I made a Deer and Doe Plantain, a t-shirt that is fitted at the shoulders and flares at the hips. I had used the pattern a few times and wanted to recreate the look of one of my favourite versions that I made in January 2015. That tee has been in heavy rotation since then and can no longer be worn in public as it's almost see-through now. 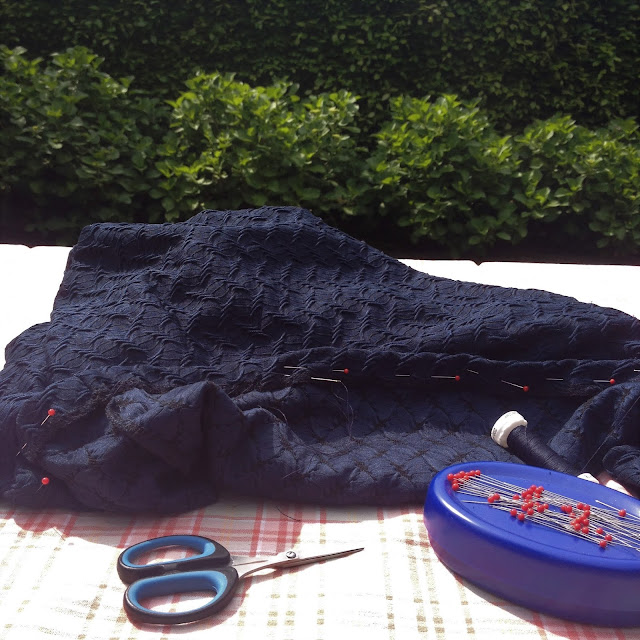 Here's a close up of the fabric. A sturdy textured knit, perhaps a bit too stiff do do justice to the flared hipline, but all in all a versatile garment that makes retiring its predecessor much easier.

Next: a refashioning project.


I'd been wanting to make a navy and white striped Cashmerette Concord T-shirt but just couldn't find the right fabric. One day I discovered this monstrosity in the back of my closet: 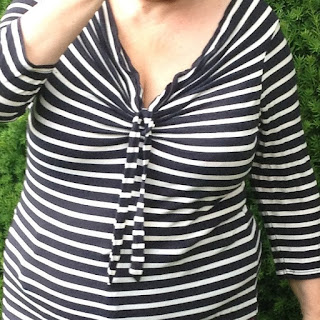 A long forgotten RTW top with a neckline that would only look good when the ties were pulled so tight that the V ended up at belly button level. But the fabric was exactly what I had in mind and the top was tunic length, so plenty of fabric to play with. For a short moment I considered keeping as much of the top intact as I could, but I ended up taking it apart to start from scratch. The sewing was horrible! 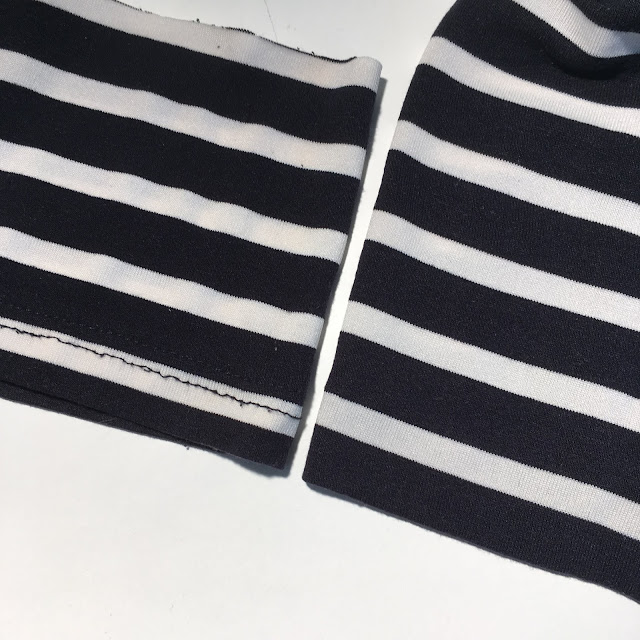 I cut off just enough from the bottom to create a neckband (navy on the outside, half white/half navy on the inside) and ended up with what turned out to be one of my favourite travel shirts. 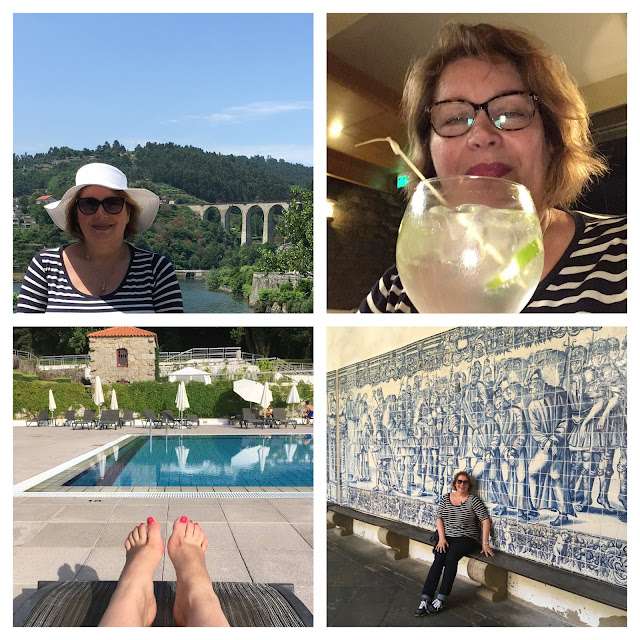 Working with the Concord pattern reminded me of the time I used this pattern to make sleepwear.
Apparently our high summer temperatures were killing my creativity as not only did I use the same pattern, I used the same print again as well. 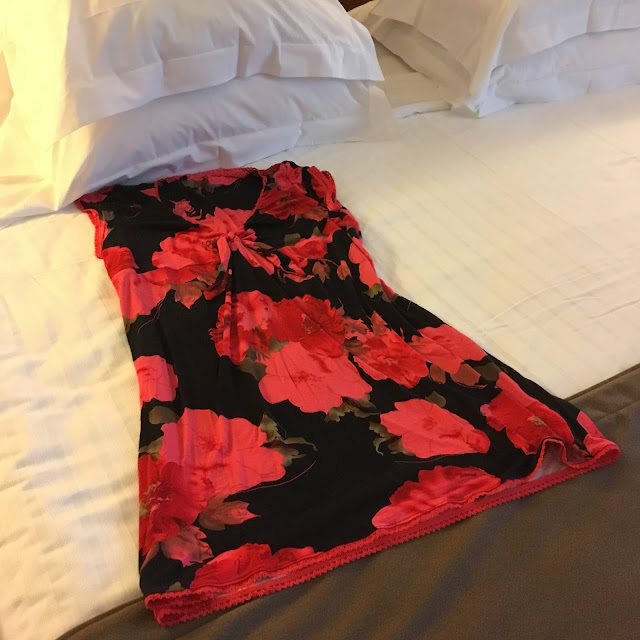 In order to prevent a total deja vu effect I used a different colourway of the fabric, drafted cap sleeves and used matching lingerie elastic not only to the neckline but also along the sleeves and hem. 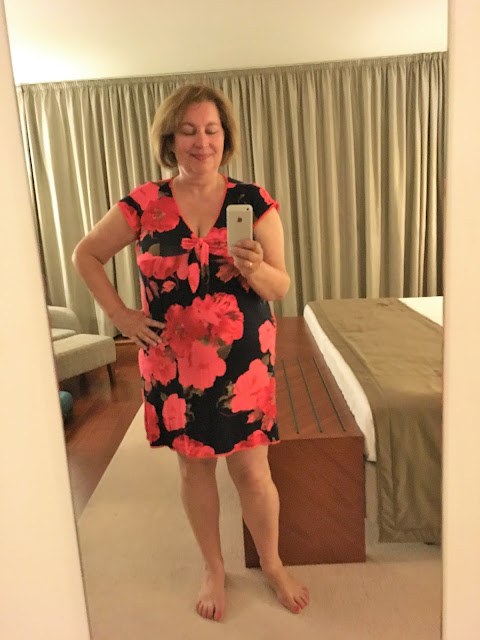 The last remake of this summer is another Helen's Closet Blackwood cardigan. 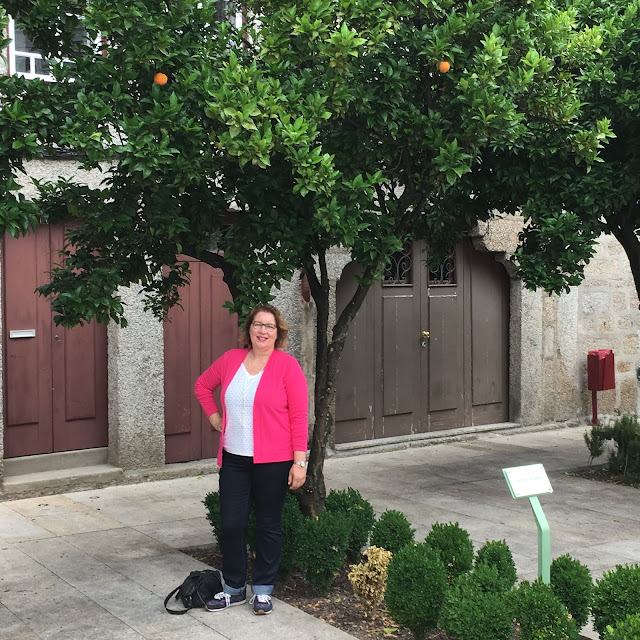 It was my fourth version of this pattern and I call it Murphy. Everything that could go wrong did go wrong. The fabric, a lovely cotton jersey, had a faded line down the middle. I was so happy to finally find the shade of pink I was looking for that I failed to notice this flaw. I managed to mostly work around this issue, only to discover later that there was barely enough stretch for this pattern. And it is wrinkling like crazy. Then, right in the middle of this project, my serger knife hit a pin so Murphy's insides looked wonky and frayed. 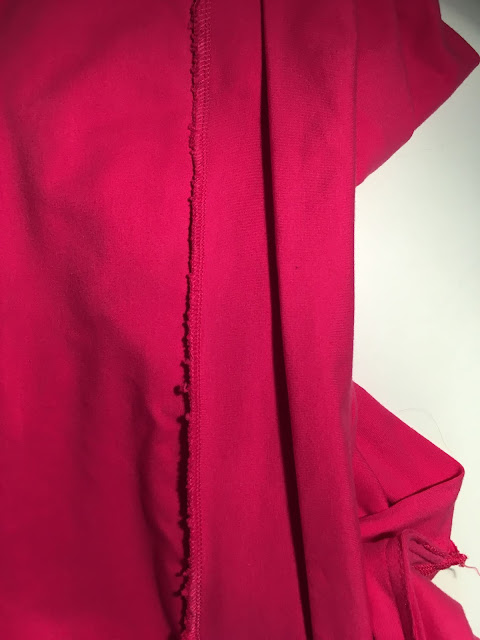 By this time the only thing that kept me going was that gorgeous pink.

When I first made this floral Blackwood I wasn't too happy with the horizontal seam hitting me at the widest part of my high hip. I considered making the band the same width as the front bands, but suspected the counterweight was needed for a correct hang. So I kept the band at the original width and added 7 cm length to the bodice. Guess what? That looked odd. When I asked Mr Foxgloves for his opinion, without mentioning the length issue, he took one glance, raised an eyebrow and said: 'That cardigan is either too long or too short.' I did not want to restart the now blunt and misbehaving serger so I simply folded the hem band over and hand stitched it to the seam, thus enclosing the frayed edges.
Smaller hem band, same weight, shorter length. Still far from perfect, but much better.
And pink :) 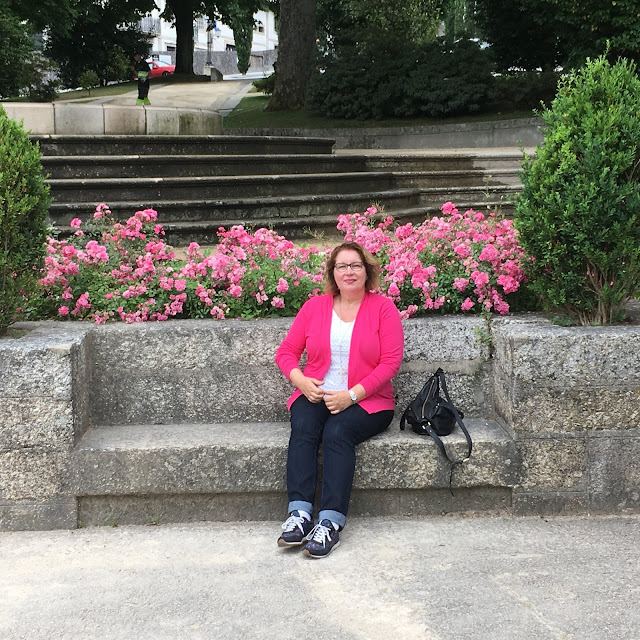 Next up: a few new patterns, sewing for men, Christmas dresses, a brand new sewing machine and exciting sewing plans.

Thanks for stopping by!